Total revenues were $84.7 million, up 104.4% from the year-ago quarter. The significant increase was mainly due to higher year-over-year Captisol revenues as well as contract revenues. The top line also beat the Zacks Consensus Estimate of $73.32 million.

Ligand’s shares have gained 19.6% so far this year against the industry’s 0.3% decrease. 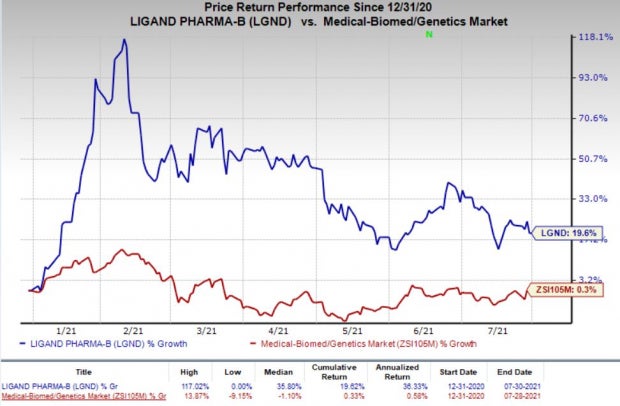 Royalty revenues were up 20% year over year to $8.6 million in the second quarter. Ligand primarily earns royalties on sales of Amgen's (AMGN - Free Report) Kyprolis and Acrotech Biopharma’s Evomela, which were developed using its Captisol technology.

Captisol sales gained 155.5% year over year to $62.5 million. The increase was due to higher sales of Captisol to support availability of Gilead’s (GILD - Free Report) remdesivir, which is approved for treating severe COVID-19 patients in the United States and several other countries.

Moreover, BeiGene received first approval for Kyprolis in China as a treatment for multiple myeloma.

The company currently has 19 different OmniAb-derived antibodies under development through different partners. The leading OmniAb-derived antibody candidate, CStone Pharmaceuticals’ sugemalimab is under review in China as a potential first-line treatment for advanced squamous and non-squamous non-small cell lung cancer. CStone also successfully completed a late-stage study on the candidate evaluating it in stage III non-small cell lung cancer. A new drug application is expected to be filed for this indication in China soon.

Several other partnered programs are progressing well with successful completion of a few late-stage studies.

Ligand lowered its previously announced guidance for sales and earnings for 2021 to reflect lower demand for remdesivir. It now expects total revenues to be between $265 million and $275 million in 2021 compared with the previous guidance of $291 million.

Currently, the company expects earnings to be in the range of $5.80-$6.05 per share for the year versus the previous guidance of $6.15.

However, Captisol sales are likely to decline in the upcoming quarters as vaccinations will likely reduce severe COVID-19 cases, thereby negatively affecting demand for remdesivir.

Meanwhile, the company has been adding new drug-discovery technologies to its already robust portfolio. These technologies are boosting partnership deals, which are likely to boost the company’s revenues going forward.

Here's What We Expect From ConocoPhillips' (COP) Q2 Earnings