The company’s revenues of $13.96 billion beat the Zacks Consensus Estimate of $13.71 billion as well as the company’s expectation of $13.6 billion. The top line improved 33.9% year over year on a reported basis and 19.3% on an operational basis.

Please note that AbbVie completed the acquisition of Allergan in May 2020. The comparable operational growth rate includes full quarter, current year, and historical results for Allergan, as if the acquisition closed on Jan 1, 2019, at constant currency rates.

AbbVie’s shares have gained 11% so far this year compared with the industry’s 12.3% increase. 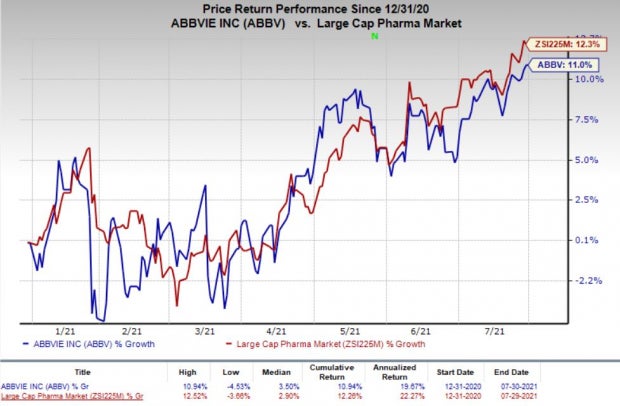 In immunology, key drug Humira recorded sales increase of 3.6% on an operational basis year over year with revenues from the same coming in at $5.1 billion. Sales in the United States climbed 7.1% to $4.26 billion. However, Humira sales in the ex-U.S. markets were down 12.6% on an operational basis to $811 million. International sales were affected by the launch of several direct biosimilar drugs in Europe by other pharma companies including Amgen (AMGN - Free Report) , Sandoz and Biogen.

The company’s leukemia drug, Venclexta generated revenues of $435 million in the reported quarter, reflecting growth of 38.3% year over year on an operational basis. AbbVie has a partnership with Roche (RHHBY - Free Report) for Venclexta.

AbbVie’s aesthetics portfolio sales more than doubled on a reported as well as operational basis to $1.43 billion on the back of robust demand for Botox Cosmetic whose sales also more than doubled to $584 million.

Sales of neuroscience portfolio increased 29.6% operationally to $1.46 billion driven by Botox Therapeutic and Vraylar. While Botox Therapeutic sales rose 38.6% to $603 million, sales of Vraylar were up 25.8% to $432 million. AbbVie’s newly launched oral migraine drug, Ubrelvy, generated $126 million in revenues, compared with $81 million in the first quarter 2021.

Eye care portfolio sales gained 24.1% on an operational basis to $919 million. Sales of a key drug in the portfolio, Restasis, increased 24.6% year over year to $327 million.

Other products that delivered an encouraging performance include Creon and Linzess, which recorded revenue growth of 11% and 18.6%, respectively, on an operational basis. Sales of Mavyret increased 13.9% operationally to $442 million. However, sales of Women's Health portfolio decreased 17%, operationally. Sales of Lupron declined 5.3%.

AbbVie raised its adjusted earnings per share (“EPS”) guidance for 2021. The company now expects adjusted EPS to be in the range of $12.52-$12.62 compared with the previously issued guidance of $12.37-$12.57. The increased earnings expectations reflect robust demand for AbbVie’s products amid the COVID-19 pandemic. However, the company’s guided range falls short of the Zacks Consensus of $12.65 per share.