Colgate-Palmolive Company (CL - Free Report) has reported second-quarter 2021 results, wherein earnings were in line with the Zacks Consensus Estimate, while sales beat the same. Both top and bottom lines improved year over year. Results gained from continued business momentum as well as investments in premium innovation and digital transformation. However, management noted cost headwinds to persist in the second half of 2021. It remains on track with its growth management initiatives.

On a Base Business basis (adjusted non-GAAP), earnings of 80 cents per share rose 8% from the prior-year quarter and were in line with the Zacks Consensus Estimate. On a GAAP basis, earnings grew 12% to 83 cents per share in the quarter under review.

Net sales of $4,260 million improved 9.5% from the year-ago period and beat the Zacks Consensus Estimate of $4,244 million. On an organic basis, the company’s sales advanced 5% driven by higher volumes and improved pricing. This marked the 10th successive quarter of organic sales growth within or beyond its targeted range of 3-5%. Unit volumes increased 2.5% on both reported and organic basis, while pricing was up 2.5% and favorable currency impact was 4.5%. Organic sales growth was mainly led by strength in all segments except North America.

Colgate’s market share of manual toothbrushes has reached 30.8% year to date. Further, the company continued with its leadership position in the global toothpaste market, with a market share of 39.3%.

Despite decent quarterly results, shares of the company fell more than 2% in the pre-market trading session on Jul 30. However, shares of this Zacks Rank #3 (Hold) company have gained 3.6% in the past three months, outperforming the industry’s growth of 2%. 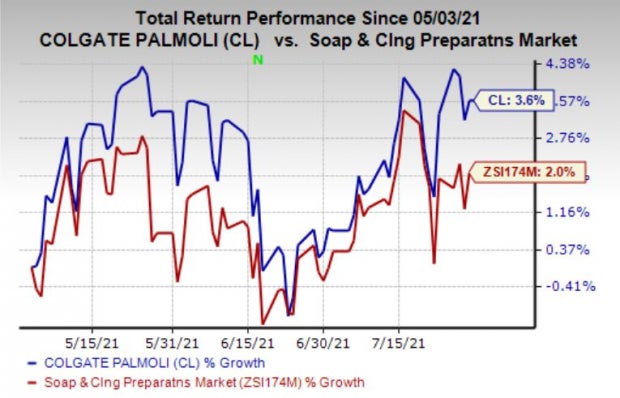 North America’s net sales (21% of total sales) declined 4%, reflecting an 8.5% fall in unit volumes, offset by 4% pricing gains and a 0.5% favorable currency. On an organic basis, sales dipped 4.5%, with organic volumes down 8.5%. Year to date, the company’s share in the toothpaste market is 34.2% and 39.3% in the manual toothbrush market in the United States.

Latin America’s net sales (21% of total sales) rose 12.5% year over year on 6% gains in pricing, 4% favorable currency and 2.5% volume growth. On an organic basis, sales were up 8.5%, led by growth in Brazil, Argentina and Mexico. Organic volumes also grew 2.5% in the quarter.

Europe’s net sales (17% of total sales) increased 15% year over year on a reported basis and 5% on an organic basis. This growth is attributable to a 7% rise in unit volumes (both reported and organic) and a 10% positive currency impact, which more than offset the 2% decline in pricing. Organic sales growth was driven by strength in the U.K., Germany, Poland and the Nordic region.

The Asia Pacific segment’s net sales (16% of total sales) improved 7.5% on a reported basis and 1% on an organic basis. This growth is attributable to a 3.5% rise in unit volumes (both reported and organic) and a 6.5% favorable currency, which more than offset the 2% decline in pricing. Sales growth in the Asia Pacific was mainly led by India and Thailand.

Africa/Eurasia’s net sales (6% of total sales) increased 15.5% year over year due to a 9.5% rise in unit volumes (both reported and organic), a 3.5% increase in pricing and a 2.5% favorable impact of foreign exchange. Organic sales for Africa/Eurasia improved 13%, driven by gains in Turkey, Nigeria and Russia.

Hill’s Pet Nutrition’s net sales (19% of total sales) grew 18% from the year-ago quarter on a reported basis and 15% on an organic basis. Results gained from a 10.5% increase in unit volumes (both reported and organic), 4.5% pricing growth and a 3% positive currency impact. Sales were aided by gains in the United States, Europe and Latin America.

Colgate ended second-quarter 2021 with cash and cash equivalents of $937 million and total debt of $7,966 million. Net cash provided by operating activities amounted to $1,225 million for the six months ending Jun 30, 2021.

Despite reporting decent second-quarter results, management revised its bottom line guidance and reiterated its top line view for 2021. The company continues to predict net sales growth of 4-7%, with a low-single-digit favorable currency impact. Organic sales are likely to rise 3-5%, which is within its long-term target range. However, it expects gross margin to decline on both GAAP and adjusted basis, with an increase in advertising investments. The company anticipates the bottom line to be at the lower end of the guided range of low to mid-single digits on a GAAP basis and also at the lower end of the mid to high-single-digit range on a non-GAAP basis.