2 Highly-Ranked Stocks to Buy in August and Hold

The subdued reactions are hardly shocking given the huge run the market and technology stocks went on heading into the heart of earnings season. Investors finally started to dive back into tech in mid-May, as the cyclical trade slowed and many surefire long-term standouts reached levels too enticing to miss.

Investors shouldn’t be surprised if we see more near-term selling, given how quickly the mid-July pullback was wiped out. Wall Street might take more profits off the table and we could see another healthy recalibration, as tech names sit near some elevated technical levels.

Despite possible pullbacks and corrections, the bull case remains strong, even taking into account economic slowdown fears and Delta coronavirus worries. The U.S. economy expanded beyond its pre-pandemic levels in the second quarter, with GDP up 6.5%. Meanwhile, consumer confidence popped in July to the highest level in 17-months and the earnings picture keeps improving.

Investors with outlooks of a year or more often shouldn’t really worry about buying at new highs or timing the market. Not only is it extremely difficult, it can sometimes lead to buying high and selling low. The market’s moves since covid came into our lives highlight the benefits of buy and hold investing.

Plus, the Fed just offered up its somewhat standard sentiment regarding eventual rate hikes. And Wall Street will be left chasing returns in stocks for the foreseeable future because rates will remain historically low for years to come even when the central bank raises them—the 10-year U.S. Treasury has remained below 3% for nearly all of the past decade. 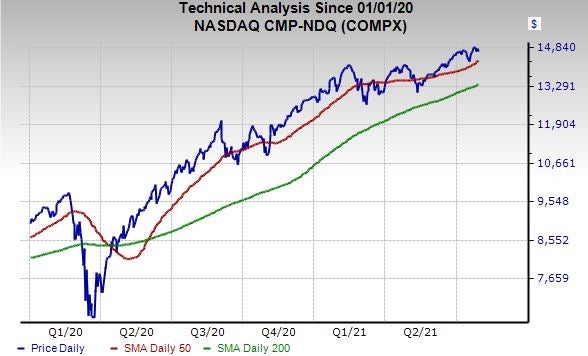 Lululemon ran back up to records recently as Wall Street piles back into the athleisure powerhouse after it had been beaten-down for around eight months. LULU was due for a stretch of underperformance given its extended run, as investors bought up Levi (LEVI - Free Report) and other apparently more reopening-style stocks. The popular apparel firm did take a covid hit, but it posted blowout Q1 results in early June and LULU’s growth outlook cements its standing in fashion and retail.

Lululemon expanded from niche high-end yoga-focused clothing firm in the late 1990s to global apparel giant. It now sells an array of athletic apparel for women and men, alongside clothing that can be worn to work, on dates, at the golf course, and beyond. LULU’s successful athleisure business has slowly helped change the way many people dress, as people dress more casually than ever from work to a night out. 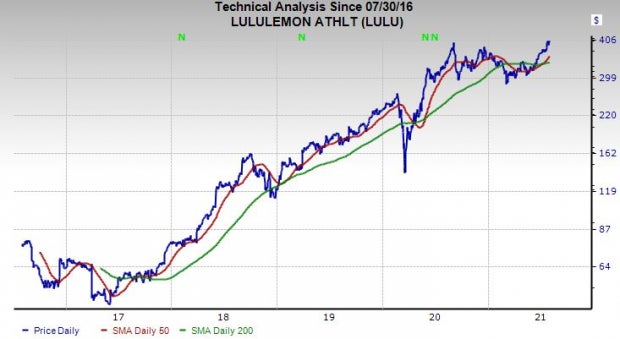 LULU has rolled out self-care products and other newer offerings, and last year it bought digital-focused at-home fitness company Mirror. The acquisition puts it in a hot growth category alongside Peloton PTON. Overall, Lululemon’s successful brand building and growth inspired everyone from Gap (GPS - Free Report) to Target (TGT - Free Report) to start their own athleisure brands.

Lululemon has always focused on direct-to-consumer through its own stand-alone stores and e-commerce. LULU is expanding in Asia and elsewhere and it closed Q1 with 523 stores. The firm’s first quarter (period ended in early May) revenue soared 88% from Q1 FY20 and 57% from the pre-covid period to reach $1.22 billion.

LULU has also topped our EPS estimates by an average of 24% in the trailing four periods and its consensus earnings estimates have popped since its last report. Plus, its most recent estimates come in well above our current consensus.

As we touched on, LULU underperformed its industry and the benchmark index over the past year, up 23% vs. 38% for S&P 500. But the stock has popped 30% since mid-May as Wall Street bought beaten-down growth names. Lululemon hit new highs Thursday and currently trades right around $400 a share.

The stock is up 235% in the last three years to easily top the also recently-resurgent Nike’s (NKE - Free Report) 117% climb. Despite sitting at records, LULU trades 25% below its year-long highs and right at its median at 8.2X forward sales. Lululemon does now rest near overbought RSI levels (70), which means a pullback could be in order in the near-term.

Lululemon’s bottom-line positivity helps it land a Zacks Rank #1 (Strong Buy) right now. On top of that, 15 of the 22 broker recommendations we have are “Strong Buys,” with none below a “Hold.” The athleisure firm also boasts a strong balance sheet and its Textile-Apparel space sits in the top 13% of over 250 Zacks industries.

Apple, like Lululemon, surged to new highs recently after lagging the market and its peers for the better part of eight months. The tech titan then posted blowout Q3 FY21 results on July 27, with revenue up 36% and adjusted EPS 100% higher.

The company’s flagship smartphone helped drive the growth, with sales up 50% for the best iPhone growth in years. Apple also continues to enjoy strong expansion outside of the iPhone, with smartphone sales accounting for roughly 49% of Q3 revenue—a few years back iPhone sales often made up over 60%.

Mac sales popped 15% last quarter and iPad climbed 12%. The success of its wireless headphones and other devices helped its Wearables, Home and Accessories space jump 36%. Perhaps more importantly, its services unit climbed 33% to account for 22% of sales—making it easily the second-largest space behind the iPhone.

Chief executive Tim Cook has aimed to transform Apple far beyond an iPhone company and continually make money from its massive and growing user base. These services efforts go beyond its App Store and include Netflix (NFLX - Free Report) and Spotify (SPOT - Free Report) competitors, a subscription news offering, Apple Wallet, a video game platform, digital workout classes, and much more. AAPL closed Q3 with over 700 million paid subscriptions, up 150 million from the year-ago period and “nearly four times the number of paid subscriptions” it “had only four years ago.”

Executives did say they expect to experience supply chain setbacks in Q4, with “supply constraints” set to be “greater than what we experienced during the June quarter.” AAPL stock dipped slightly following its report, which is no surprise given its pre-earnings surge. The stock could also see some more selling in the near-term if Wall Street takes profits. Yet, Apple is trading a few dollars below its $150 a share record and it sits well under overbought RSI (70) levels at 58.

AAPL shares have only climbed 11% in 2021 to underperform the tech sector’s 22% and the S&P 500’s 19%. This is mostly due to the fact that Apple skyrocketed from its covid lows until right after its stock split last year. Apple is up 38% in the past year and 210% in the last three years to nearly double the Zacks tech sector. And despite resting right near new highs, AAPL trades 25% below its own year-long highs, under its median, and at a slight discount to its industry at 27.3X forward 12-month earnings.

Apple’s bottom-line outlook has improved since its report to help it land a Zacks Rank #1 (Strong Buy), alongside its “A” grade for Momentum in Style Scores system. Zacks estimates call for AAPL’s FY21 revenue to climb 34% from $275 billion to $367 billion to crush last year’s 6% pop and mark its strongest top-line growth since 2015. Meanwhile, its adjusted earnings are projected to soar 70% this year. And Apple is still set to grow its top and bottom lines next year.

Apple made news over the last year-plus and more recently for its privacy efforts that now impact Facebook (FB - Free Report) and other’s ability to track users. AAPL does face some legal battles about its own app store. But Wall Street doesn’t seem worried, especially when the demand for its first 5G capable iPhone has been strong. Investors should also note Apple has brought more of its chips in-house and there have even been reports it’s considering entering the electric vehicle market.

Apple also remains a cash cow and it returns that money to shareholders through buybacks and dividends—$29 billion worth last quarter. The firm ended Q2 with net cash of $72 billion and 18 of the 24 brokerage recommendations Zacks has are “Strong Buys,” with four more “Buys.”

Apple sells high-end consumer electronics that millions of people crave, and its branding prowess remains nearly unmatched. The business is poised to boom in a world full of smartphone and device addicts, especially as its subscriptions grow. AAPL and the broader technology gains in the run up to earnings season might give some investors pause. But those with long horizons shouldn’t focus too hard on finding the best entry points for the $2.4 trillion behemoth.

2 Top-Ranked Tech Stocks to Buy and Hold After Earnings