For first-half 2021, demand for commercial vehicles in the European Union (EU) region increased 36.9% year over year to 1 million units. Most markets witnessed double-digit percentage growth during this time period. Registrations in key countries including Italy, Spain, Germany and France rose 53.7%, 38.4%, 21.7% and 36.4% year over year, respectively.

While Ford and O’Reilly presently hold a Zacks Rank #1 (Strong Buy) and 2 (Buy), respectively, PACCAR, LKQ and Tesla carry a Zacks Rank #3 (Hold) each. You can see the complete list of today’s Zacks #1 Rank stocks here.

1. Tesla hit a milestone in second-quarter 2021, with quarterly profits topping $1 billion for the first time. It reported second-quarter 2021 earnings of $1.45, which surpassed the Zacks Consensus Estimate of 90 cents per share and compared favorably with the year-ago earnings of 44 cents. Total revenues came in at $11,958 million, surpassing the consensus mark of $11,389 million and rising 98.1% year over year. While Tesla has not provided any clear delivery target for 2021, it reiterated its goal of achieving 50% average annual growth in vehicle deliveries over a multi-year horizon. (Tesla Q2 Earnings & Sales Top Mark, FCF Soars 48% Y/Y)

2. Ford posted second-quarter 2021 adjusted earnings of 13 cents per share against the Zacks Consensus Estimate of a loss of 11 cents. This marked the fifth straight earnings beat for the firm. The bottom line turned around from the year-ago loss of 35 cents per share. Its consolidated second-quarter revenues came in at $26.8 billion, up 38% year over year. Ford raised its full-year 2021 EBIT and FCF guidance. FCF is now envisioned in the band of $4-$5 billion, up from the previous guided range of $500 million to $1.5 billion. The company now forecasts full-year 2021 EBIT within $9-$10 billion, higher than the prior view of $5.5-$6.5 billion. (Ford Q2 Earnings Crushes Estimates, '21 View Raised)

3. PACCAR reported earnings of $1.41 per share for second-quarter 2021, beating the Zacks Consensus Estimate of $1.38. Consolidated revenues (including trucks and financial services) came in at $5.84 billion, up from $3.06 billion recorded in the corresponding quarter of 2020. Sales from Trucks, Parts and Others came in at $5,387.6 million, missing the consensus mark of $5,441 million. Revenues in the financial services segment increased to $456.3 million from the year-earlier quarter’s $360.3 million and beat the consensus estimate of $437 million. For 2021, capex is projected at $550-$600 million, while R&D expenses are estimated in the $340-$360 million band. (PACCAR's Q2 Earnings Beat, Revenues Miss Estimates)

4. O’Reilly reported second-quarter 2021 earnings per share of $8.33, surpassing the Zacks Consensus Estimate of $7.28 on remarkable comparable store sales growth. Comps grew 9.9% year over year for the quarter. The bottom line also increased from $7.10 a share recorded in the prior-year quarter. This U.S.-based specialty retailer of automotive parts registered quarterly revenues of $3,466 million, which topped the consensus mark of $3,151 million and grew from the prior-year level of $3,092 million. For 2021, the company envisions earnings per share within $26.80-$27.00 versus the previous view of $24.75-$24.95. (O'Reilly Tops Q2 Earnings & Sales Mark, Ups '21 View) 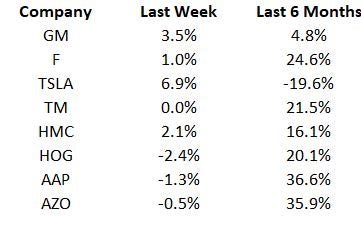 In the past six months, all stocks have increased, apart from Tesla. The past week displayed a mixed price performance, with Harley-Davidson losing the most and Tesla registering the maximum gain.

Industry watchers will be keeping a close watch on July 2021 U.S. car sales, which will be coming out this week. Also, stay tuned for quarterly releases of major auto companies including S&P 500 sector components like General Motors, BorgWarner and Cummins, which are set to report this week.