Novavax (NVAX) to Report Q2 Earnings: What's in the Cards?

The company’s earnings surprise record has been dismal so far, as its earnings beat the Zacks Consensus Estimate in only one of the trailing four quarters and lagged the same on the other three occasions, the average negative surprise being 70.05%. In the last-reported quarter, Novavax witnessed a negative earnings surprise of 15.09%.

Shares of Novavax have surged 63.8% so far this year against the industry’s decrease of 1.3%. 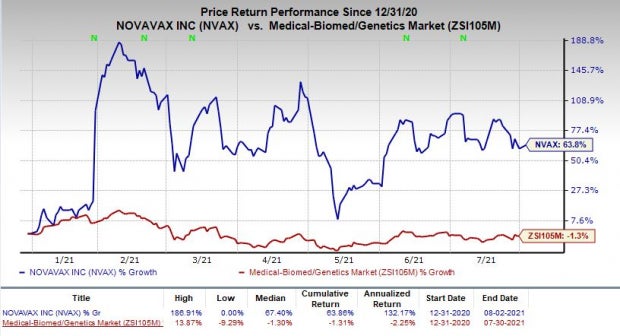 Novavax currently does not have any approved product in its portfolio. As a result, the company is yet to generate revenues from product sales.

In the last-reported quarter, revenues increased significantly year over year owing to the funding from the Coalition for Epidemic Preparedness Innovations and other sources in relation to the clinical development of its coronavirus vaccine candidate, NVX-CoV2373, a trend most likely to have continued in the to-be-reported quarter.

In June 2021, Novavax announced data from the phase III PREVENT-19 study which evaluated NVX-CoV2373 in the United States and Mexico. The study met its primary endpoint by demonstrating an overall vaccine efficacy of 90.4%. The vaccine also provided 100% protection against moderate and severe disease – a key secondary endpoint.

The vaccine demonstrated an efficacy of 93% against the new variants – predominantly circulating variants of concern (VoC) and variants of interest (VoI). The vaccine was found to be effective against strains of the virus first found in the United Kingdom, United States, Brazil, South Africa and India.

Novavax plans to file for regulatory authorizations for NVX-CoV2373 in the third quarter of 2021. We expect more updates on the progress of the COVID-19 vaccine candidate at the upcoming investors’ call.

In June 2021, Novavax announced positive data from the first co-administration study which evaluated NVX-CoV2373 plus an approved influenza vaccine. Data from the study showed that vaccine efficacy appeared to be preserved in those receiving both vaccines compared to those vaccinated with NVX-CoV2373 alone. Investors will be keen to get more updates on the same at the upcoming earnings call.

Development activities related to NVX-CoV2373 are likely to have escalated operating expenses in the to-be-reported quarter.

Novavax plans to file a biologics license application to the FDA shortly, seeking an accelerated approval for NanoFlu. An update on the regulatory timeline of the vaccine is expected during the upcoming earnings call.

Our proven model does not conclusively predict an earnings beat for Novavax this time around. The combination of a positive Earnings ESP and a Zacks Rank #1 (Strong Buy), 2 (Buy) or 3 (Hold) increases the odds of an earnings beat. Unfortunately, that is not the case here, as you will see below. You can uncover the best stocks to buy or sell before they're reported with our Earnings ESP Filter.

Earnings ESP: Novavax’s Earnings ESP is 0.00% as both the Most Accurate Estimate and the Zacks Consensus Estimate are pegged at a loss of $3.76 per share.

Here are a few stocks you may want to consider, as our model shows that these have the right combination of elements to beat on earnings this reporting cycle:

Adverum Biotechnologies, Inc. (ADVM - Free Report) has an Earnings ESP of +19.46% and carries a Zacks Rank #2 at present. You can see the complete list of today’s Zacks #1 Rank stocks here.

Sarepta Therapeutics, Inc. (SRPT - Free Report) has an Earnings ESP of +25.10% and carries a Zacks Rank #3 at present. The company is scheduled to report earnings on Aug 4.