Shell (RDS.A) Proceeds With Whale Project in US Gulf of Mexico

Royal Dutch Shell plc (RDS.A - Free Report) , through its subsidiary Shell Offshore Inc., made a final investment decision for its Whale deep-water field development in the southern part of the U.S. Gulf of Mexico.

The Whale field development, which was discovered in 2017, is located in the Alaminos Canyon field in Block 773, about 320 kilometers southwest of Houston. It will be the company’s 12th deep-water host in the Gulf of Mexico.

Shell Offshore is the operator of the project, with a 60% participating interest, while Chevron Corporation (CVX - Free Report) owns the rest. It is the first major oilfield project to get clearance after the Dutch court ordered Shell to enhance its renewable energy targets.

Whale will possess a semi-submersible floating production unit (FPU) more than 8,600 feet below the water surface, with 15 oil-producing wells. The FPU will be a 99% replica of Shell's Vito project and 80% of the topsides. Vito, which is also a deepwater development in the Gulf of Mexico, is scheduled to begin production in 2022. The use of a similar platform is expected to reduce the development time and costs of the project.

The Whale oilfield project will be the second Shell-operated deep-water development in the Gulf of Mexico to use a simple and cost-efficient host design. With the approach, Shell expects an internal rate of return of more than 25%, which is significantly higher than the sector's average of 10-15%.

Moreover, the Whale development will have energy-efficient gas turbines and compression systems. The development will be the latest addition to Shell’s Gulf of Mexico portfolio, where exploration and production of oil involve fewer emissions.

Shell is one of the primary oil majors — a group of U.S. and Europe-based big energy multinationals — with global operations. The company is fully integrated, as it participates in every aspect related to energy from oil production to refining and marketing.

Shares of the company have outperformed the industry in the past three months. The stock has gained 4.9% compared with the industry’s 0.5% growth. 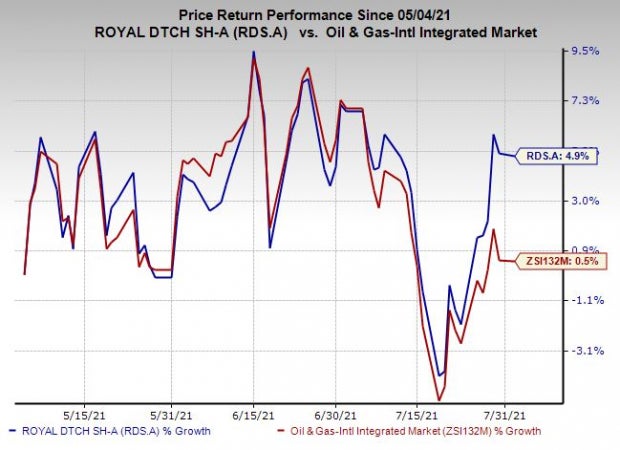 Northern’s earnings for 2021 are expected to increase 45.2% year over year.

What's in the Offing for Star Bulk (SBLK) in Q2 Earnings?