Barring one-time items, earnings were $2.46 per share for the quarter, up from 85 cents in the year-ago quarter. Earnings topped the Zacks Consensus Estimate of $2.32.

Revenues rose 38% year over year to $2,653 million in the quarter from $1,924 in the previous-year quarter. The figure also surpassed the Zacks Consensus Estimate of $2,398.8 million.

The company gained from its innovation-driven growth model, operational execution and cost-management actions in the reported quarter. It saw revenue growth across all segments led by continued market revival.

Revenues from the Additives and Functional Products division went up 35% year over year to $925 million for the reported quarter, aided by 23% volume/mix growth and a 9% increase in selling prices. Increased sales of coatings additive products contributed to a favorable product mix and selling prices were higher primarily due to increased raw-material prices. However, increased volumes in building & construction end markets were offset by limited product availability from shutdowns related to planned manufacturing maintenance.

Revenues from the Advanced Materials unit rose 36% year over year to $769 million in the previous-year quarter. The upside was primarily driven by 31% volume/mix growth due to end-market recovery. A favorable product mix across the segment was led by increased sales of premium products, including performance films and specialty plastic products.

Chemical Intermediates sales increased 60% year over year to $736 million, led by a 51% increase in selling prices due to higher raw-material prices.

Fibers segment sales went up 6% year over year to $223 million, on the back of 7% volume/mix growth that was partially offset by 2% lower selling prices. Higher sales volume was driven by the continued recovery of the textiles end market. Lower selling prices were mostly due to previously negotiated multi-year contracts for acetate tow.

Eastman Chemical ended the quarter with cash and cash equivalents of $609 million, a roughly 5% year-over-year decline. Net debt at the end of the quarter was $4,939 million, a 2.3% decline year over year.

Eastman Chemical generated cash from operating activities of $426 million and a free cash flow of $319 million in the quarter.

The company also returned $328 million to its shareholders through dividends and share repurchases during the quarter.

Eastman Chemical said that it is seeing continued momentum, going forward, as it gains from innovation, strong end-market recovery and cost discipline from its operations transformation program. It expects adjusted earnings per share of $8.8-$9.2 for 2021. It also anticipates free cash flow to exceed $1.1 billion for the year, which would be the fifth consecutive year of a free cash flow above $1 billion.

Eastman Chemical’s shares have rallied 48.8% over a year, outperforming the 39.6% rise of the industry. 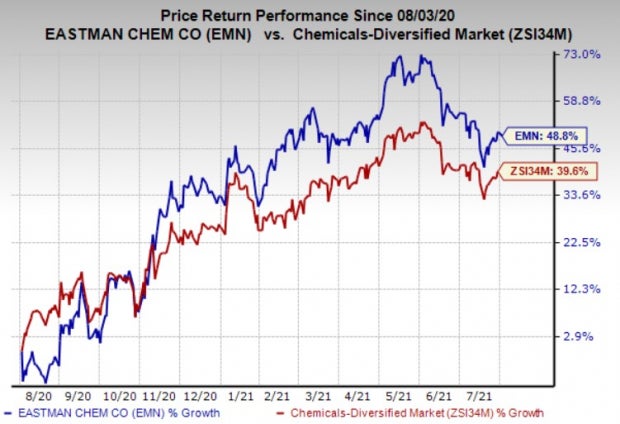 Orion has a projected earnings growth rate of 79.8% for the current year. The company’s shares have grown 68% over a year.

LyondellBasell has a projected earnings growth rate of 222.6% for the current year. The company’s shares have risen 59.2% over a year.

Avient has a projected earnings growth rate of 65.3% for the current year. The company’s shares have surged 96% over a year.

MasTec (MTZ) to Report Q2 Earnings: What's in the Offing?