Adjusted earnings per share of $1.17 missed the consensus mark by 12.7% and fell 9.3% on a year-over-year basis. The downside was backed by higher effective tax rate, partially offset by organic growth in the business, contributions from acquisitions and lower average share count.

Revenues of $747.5 million beat the consensus estimate by 2% and increased 10.1% year over year on a reported basis and 6.3% on an organic constant-currency (cc) basis.

So far this year, shares of Verisk have declined 9.1% compared with 16.7% growth of the industry it belongs to and 20.3% increase of the Zacks S&P 500 composite. 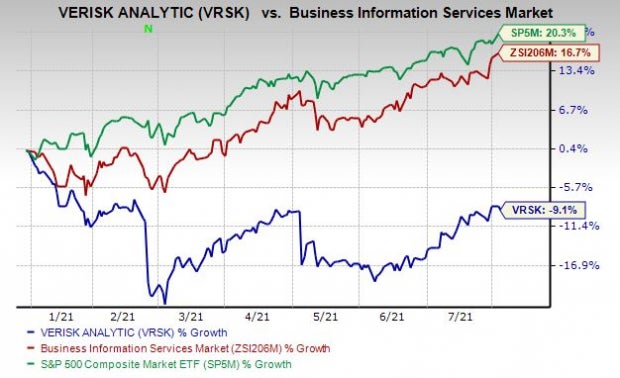 Insurance segment revenues totaled $550 million, up 11.8% year over year on a reported basis and 7.8% on an organic cc basis.

Within the segment, underwriting and rating revenues of $388.4 million rose 11.2% on a reported basis and 7.6% on an organic cc basis. The upside was primarily driven by an annual increase in prices derived from continued enhancements of the solutions’ contents within the industry-standard insurance programs, sale of expanded solutions to existing customers in commercial and personal lines, and contributions from catastrophe-modeling services and international software solutions.

Claims revenues amounted to $161.6 million, improving 13.2% on a reported basis and 8.4% on an organic cc basis. The top line was positively impacted by repair cost estimating solutions revenues and claims analytics revenues.

Energy and Specialized Markets segment revenues of $162.3 million increased 9.2% year over year on a reported basis and 5% on an organic cc basis. The uptick can be attributed to contributions from consulting, and environmental health and safety service revenues.

Financial Services segment revenues of $35.2 million declined 7.4% year over year on a reported basis and 8.1% on an organic cc basis. The segment was weighed down by certain contract transitions, projects that did not reoccur and lower bankruptcy volumes, which had offset strength in spend informed analytics revenues.