Performance during the quarter gained from sales growth across all segments. Management highlighted that the company witnessed strong demand for its core products and services as businesses began operating normally and schools returned to in-class learning.  Such upsides favored the company’s Retail and Business Solutions Division operations. Also, the company’s low-cost model approach contributed to revenues.

As the company enters into the second half of 2021, it is on track with boosting digital business platform. Also, management made modifications in its plans for splitting the business. The company will now be spinning off its consumer business, while retaining the B2B operations.

This provider of business services and supplies, products and digital workplace technology solutions posted adjusted earnings of 51 cents per share, which missed the Zacks Consensus Estimate of 54 cents. In the prior-year quarter, the company incurred a loss of 7 cents.

The ODP Corporation’s total sales of $2,286 million surpassed the consensus mark of $2,272 million and increased 6% year over year. The upside was driven by improved business activity as the public sector returned to work and schools reopened.

Product sales during the quarter were up 6% year on year to $1,961 million owing to higher demand for core supply product categories, workspaces and technology. Service revenues increased 8% to $325 million, backed by higher demand for managed print and fulfillment as well as copy and print services in both Business Solutions Division and Retail Division.

Sales in the Business Solutions Division (BSD) improved 12% year over year to $1,146 million. The segment gained from stronger demand from B2B customers especially in the public and education sectors as they continued to recover from conditions related to the pandemic. The unit also gained from sales through the B2B contract channel, partially offset by lower sales in its e-commerce channel. The BSD segment witnessed higher demand for core supply products and services. Adjacency categories contributed 44% to overall BSD sales.

Segment operating income came in at $31 million, up from $13 million reported in the year-ago period. Operating margin expanded 140 basis points (bps) to 2.7%.

In the reported quarter, the Retail Division’s sales came is at $914 million, up 0.2% from $912 million reported in the prior-year quarter. Management informed that the retail segment had 169 fewer retail outlets in the reported quarter compared with the prior-year quarter’s levels, due to the planned shutdown of underperforming outlets. The segment witnessed strong demand growth in core supply categories, workspaces and technology products. Higher store traffic, sales per shopper, and conversion rates also aided the unit’s performance.

The company closed 55 retail stores during the second quarter, ending the same with 1,091 stores.

The CompuCom Division generated sales of $222 million in the quarter, up 4% year over year. The segment gained from stronger product sales.

Operating income in the division amounted to $3 million, down 25% year on year.

The company is progressing with its plans to split itself into two independent publicly-traded companies. Management has made modifications to the separation plans. The company will now be spinning off its consumer business, while it will retain B2B related operations. This reflects a change from the company’s earlier plans to separate from its B2B businesses. Management believes that the modified approach will be more efficient based on the expectation that majority of the company’s current management team and directors will remain with the B2B business. The separation will be a structured as a tax-free spin-off.

The retained B2B business will continue to operate under the name "The ODP Corporation" and will include the contract sales channel of the Business Solutions Division. It will also own the newly-formed B2B digital platform technology business, including BuyerQuest, as well as the global sourcing office and its other sourcing, supply chain and logistics assets

According to the spin-off plans, Office Depot (“New Co”) will be separated into an independent entity. It will consist of retail consumer as well as small business products and services. Distribution will be carried out through nearly 1,100 Office Depot and OfficeMax retail locations as well as the e-commerce platform, officedepot.com.

The separation is expected to be completed during the first half of 2022. Management believes that the separation is likely to improve strategic focus and boost the long-term value of its shareholders.

The ODP Corporation has been progressing well with its digital transformation initiatives. The company continues to integrate its leading P2P (procure-to-pay) software platform, BuyerQuest, and is advancing its technology development with collaboration partners. The company is also boosting its collaboration with Microsoft and is on track to bring BuyerQuest’s value proposition to Microsoft’s Business Central customers. Apart from these, management informed that the sale proceeds for CompuCom is on track. 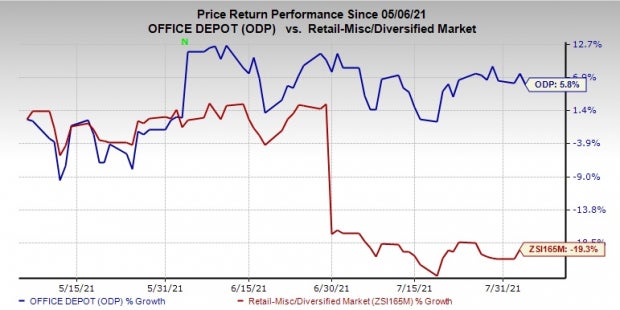 The ODP Corporation ended the quarter with total available liquidity of about $1.7 billion, comprising $691 million in cash and cash equivalents as well as $997 million of available credit under the Third Amended Credit Agreement. As of Jun 26, 2021, total debt was $359 million. Long-term debt (net of current maturities) amounted to $337 million and total shareholders’ equity were $1,841 million.

For the quarter, cash used in operating activities was $11 million. Also, management incurred capital expenditures of $16 million in the quarter.

Shares of this Zacks Rank #3 (Hold) company have moved up 5.8% in the past three month against the industry’s decline of 19.3%.

Target Corporation (TGT - Free Report) has a long-term earnings-growth rate of 13.3% and a Zacks Rank #2 (Buy). You can see the complete list of today’s Zacks #1 Rank (Strong Buy) stocks here.