This Overlooked Segment of the Construction Sector Is Going Great Guns

Tucked in between Homebuilders, Maintenance, Heavy Construction, Concrete, Wood and a host of other construction industries is a small but happening industry called Building Products - Mobile Homes and RV Builders. The industry has a Zacks Rank of 9, placing it at the top 4% of 250+ Zacks-classified industries. So, I thought it could be worth digging into.

And sure enough, it turns out that this is one of the industries that has benefited from the pandemic. Sure, there was the initial hesitation when the pandemic hit in late March, which is why April shipments were most disappointing. But sales started recovering in May and registered year-over-year growth from the following month. Recreational Vehicle (RV) makers have not looked back, as people continued to favor their own road transport to experience the outdoors with their families and friends. As a result, total RV shipments grew 6.0% in 2020.

This year has largely been a continuation of the trend, but at an accelerated pace, as vaccinations are making people bolder about going outdoors. So first quarter shipments grew 47.9% year over year to top the previous all-time high set in 1Q2018 by nearly 10%. And it was followed by further strength in the June quarter. The 619.9%, 75.9% and 25.3% shipments growth in April, May and June of this year may have been partially because of easy comps. But there was also real growth because total shipments were 2% higher than the March quarter, setting a new all-time high.

What’s more, RV Industry Association surveys seem to indicate that although the pandemic did drive more people toward RVs, there are other more compelling reasons, such as the love of road trips, a desire to travel in comfort, wanting to explore the great outdoors and the ability to use an RV as a basecamp for other outdoor recreation activities. Of course, being closer to nature also improves mental and physical well-being, which are things that younger travelers are quite keen on. These reasons may be behind the industry’s consistent long-term growth of 26% over the last 10 years and 62% over the last 20 years (Go RVing study). They’re also likely the reasons why 9.6 million households plan to buy an RV in the next five years.

The industry is also seeing a welcome change in demographics. Earlier, it was the retired people, or people more than 55 years of age that made up the bulk of RV travelers. People generally took to the road after retirement, when they wouldn’t have to deal with tight schedules and the demands of a family.

But today, millennials and Gen Zers are unwilling to wait. They are happy to catch some time away from their busy schedules, alone (or more commonly) with families. The fact that an RV can lower travel costs by anywhere between 21% and 64%, while offering great flexibility is also an important consideration. There’s also an awareness about the growing demand for RVs within this group, which is not averse to rent out the things for supplemental income. So, the 18-to-34-year-olds are a fast-growing segment, already constituting 22% of the market. Additionally, 84% of this group that already owns an RV, plans to buy a second one within the next five years.

Since 78% of them are looking for a new model, it isn’t hard to see that they could be looking for a more climate-friendly version with additional electronics. The work-from-home model could quickly become work-from-anywhere if these younger travelers had their way. A Go RVing study shows that the median number of days that RV owners use their RVs each year is also set to increase from 20 to 25 days.

It is currently expected that RV demand will remain very strong through the summer months before softening slightly be year end. It’s just as well because RV lots are emptying out faster than ever before and most RVs are currently sold before they ever make it to the lot. Nor can production be increased rapidly because of ongoing supply and labor constraints.

Given this backdrop, the industry looks very attractive. Consequently, this is a great time to grab these Zacks Rank #1 stocks that are expected to grow their revenue and earnings both this year and in the next-

Patrick Industries is a major manufacturer of component products and distributor of building products and materials for the recreational vehicle, manufactured housing and marine industries. Many of its products also find application in various industrial markets, including kitchen cabinet, office and household furniture, fixtures and commercial furnishings, etc.

June quarter revenues beat the Zacks Consensus Estimate by 16.1% while earnings beat by 37.7%.

Thor Industries is the largest manufacturer of RVs in the world. The company builds a variety of RVs in North America and Europe, and sells those vehicles along with related parts and accessories to independent, non-franchise dealers throughout the U.S., Canada and Europe.

In the April quarter, the company beat earnings estimates by 39.4% on revenue that beat by 14.5%.

At 11.3X earnings, the shares are trading below their median level of 13.6X over the past year

Winnebago Industries is a leading producer of recreational vehicles in the U.S. It has been manufacturing RVs for around 60 years and distributing them through independent dealers in the U.S. and Canada.

Its May quarter earnings topped the Zacks Consensus Estimate by 22.7% on revenue that surprised by 12.8%. 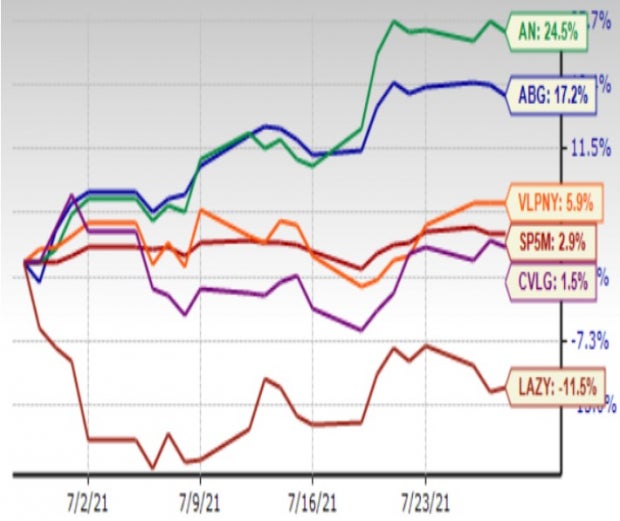