European low-cost carrier Ryanair Holdings’ (RYAAY - Free Report) July traffic was impressive as wide-spread vaccination in addition to the relaxation of restrictions in the EU led to an uptick in air-travel.

1 SkyWest, currently sporting a Zacks Rank #1 (Strong Buy), reported second-quarter 2021 earnings of $1.22 per share, beating the Zacks Consensus Estimate of 28 cents. Quarterly earnings also came against the year ago loss of 51 cents. Revenues in the June quarter summed $657 million, not only surpassing the Zacks Consensus Estimate of $581.5 million but also increasing 87.7% year over year. Passenger load factor (percentage of seats filled by passengers) increased 42 percentage points to 76.4% in the June quarter owing to the uptick in air-travel demand.

2. Gol Linhas incurred a loss (excluding $1.76 from non-recurring items) of $1.15 per share in the second quarter of 2021, narrower than the Zacks Consensus Estimate of a loss of $1.22. Net operating revenues of $194.1 million surpassed the Zacks Consensus Estimate of $188.2 million. The top line surged more than 100% year over year with passenger revenues (accounting for 86.3% of total revenues) rising more than 200%, thanks to improvement in air-travel demand due to easing coronavirus-led restrictions. Cargo and other revenues improved 23%.

3. Copa Holdings incurred a loss (excluding $1.04 from non-recurring items) of 38 cents per share in the second quarter of 2021, narrower than the Zacks Consensus Estimate of a loss of $1.08. In the year-ago period, the company reported loss of $2.70. This was the fifth successive quarterly loss incurred by the carrier. Results were hurt by the coronavirus-induced limited flight operations.  The company’s flight operations were only 48% of 2019 (pre-pandemic) level in the quarter.

Quarterly revenues of $304.3 million surpassed the Zacks Consensus Estimate of $268.4 million and rose 3.5% year over year. Management stated that the June quarter was the first period since the onset of the pandemic when the company’s operations resulted in cash accretion ($21 million per month, on average). Copa Holdings expects its capacity to reach 4.5 billion in the third quarter of 2021. This represents around 70% of the third-quarter 2019 levels.

The company anticipates total revenues of $415 million in the quarter, accounting for 58% of the third-quarter 2019 revenues.

4. Reflecting improved air-travel demand, Ryanair Holdings’ July traffic jumped to 9.3 million guests from 4.4 million guests a year-ago. The carrier’s load factor (% of seats filled by passengers) in the month was 80%, up from June’s 72%. Also, in the same period, Ryanair operated in excess of 61,000 flights.

5. In a bid to expand its footprint in South America, American Airlines inked a letter of intent with ultra-low-cost carrier JetSMART. The former intends to acquire a minority stake in the latter. The proposed codeshare agreement between the two carriers aims to boost connectivity between the United States and South America and widen travel options for passengers. Travelers will be able to earn and redeem AAdvantage miles on JetSMART flights provided the deal materializes. 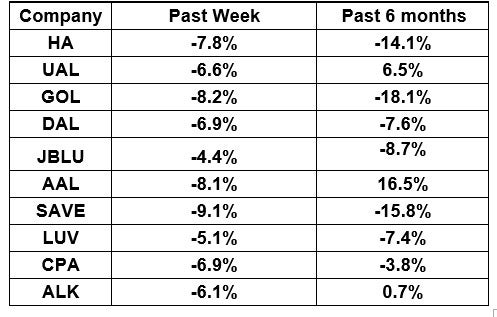 Even as air-travel demand continues to move north, flight delays are hurting carriers like American Airlines and Spirit Airlines (SAVE - Free Report) . More updates on this issue are expected in the coming days.