This significant loss was due to higher operating costs incurred to support the development of NVX-CoV2373, its COVID-19 vaccine candidate.

Revenues in the quarter were $298 million, marking a huge improvement from $36 million reported in the year-ago quarter. Revenues increased due to services performed under the agreement with the Coalition for Epidemic Preparedness Innovations and participation in the U.S. government’s Operation Warp Speed in relation to the clinical development of NVX-CoV2373. Revenues, however, significantly missed the Zacks Consensus Estimate of $371 million.

Novavax’s shares were down 12.2% in after-hours trading on Thursday following the weaker-than-expected earnings release. The stock has rallied 111.8% this year so far compared with the industry’s growth of 2.5%. 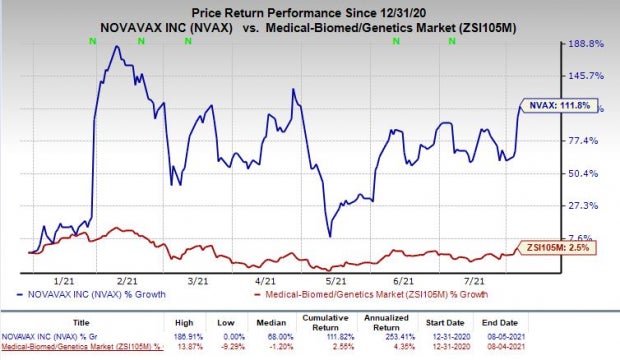 In the reported quarter, research and development expenses were $571 million, significantly up from $35 million in the year-ago quarter due to higher expenses incurred for the development of NVX-CoV2373.

General and administrative expenses also rose significantly year over year to $73 million due to higher employee-related and stock-based compensation expenses, as well as costs for supporting NVX-CoV2373’s development.

In June 2021, Novavax announced data from the phase III PREVENT-19 study which evaluated NVX-CoV2373 in the United States and Mexico. The study met its primary endpoint by demonstrating an overall vaccine efficacy of 90.4%. The vaccine also provided 100% protection against moderate and severe disease – a key secondary endpoint.

Back then, Novavax stated that it plans to file for regulatory authorizations for NVX-CoV2373 in the third quarter of 2021. However, along with the earnings release, management stated that it now plans to submit for emergency use authorization (“EUA”) to the FDA in the fourth quarter of 2021. This might have hurt investors’ sentiments and also resulted in the stock to go down in after-hours trading on Thursday.

The company expects to file for Emergency Use listing with the World Health Organization later this month.

We remind investors that the PREVENT-19 study is also evaluating NVX-CoV2373 in adolescents from 12 to less than 17 years of age. The study has enrolled 2,248 participants.

The company is advancing the clinical development of booster studies of NVX-CoV2373. In a separate press release, Novavax announced preliminary data from an ongoing phase II study evaluating NVX-CoV2373 in the United States and Australia in selected participants to examine the functional immune response.

Data from the same showed that a single booster dose of NVX-CoV2373, given six months after an initial two-dose regimen, elicited a 4.6-fold increase in functional antibody titers. Additionally, functional ACE-2 binding inhibition antibodies, cross-reactive with the Delta (B.1.617.2) variant, were more than six-fold higher than the primary vaccination series.

In a separate press release, the company announced that in partnership with Serum Institute of India, it has submitted regulatory filings for EUA of NVX-CoV2373 in multiple markets, including India, Indonesia and the Philippines.

Novavax plans to submit regulatory filing for NVX-CoV2373 in the United Kingdom later in the third quarter of 2021.

In June 2021, Novavax announced positive data from the first co-administration study which evaluated NVX-CoV2373 plus an approved influenza vaccine. Data from the study showed that vaccine efficacy appeared to be preserved in those receiving both vaccines compared to those vaccinated with NVX-CoV2373 alone.

Novavax is also looking to explore a combined NanoFlu/NVX-CoV2373 (qNIV/CoV2373) vaccine. The company plans to initiate a phase I study in Australia on this combo later in 2021 after pre-clinical data showed that qNIV/CoV2373 induced protective response against both influenza and SARS-CoV-2.