In the past week, a handful of gaming companies reported their second-quarter 2021 results. In the same time frame, the industry gained 0.7%, compared with the S&P 500 growth of 1.2%. The industry is gradually getting out of the woods driven by reopening of economy and ramped-up vaccination process.

Wynn Resorts, Limited (WYNN - Free Report) reported second-quarter 2021 results, wherein both earnings and revenues beat the Zacks Consensus Estimate. The top and the bottom lines increased on a year-over-year basis. The company reported an adjusted loss of $1.12 per share, narrower than the Zacks Consensus Estimate of a loss of $1.41. In the prior-year quarter, it had reported adjusted loss of $6.14 per share.

Revenues during the second quarter totaled $990.1 million, beating the Zacks Consensus Estimate of $938 million by 5.5%. In the prior-year quarter, it reported revenues of $85.7 million. The company benefited from solid contributions of Wynn Palace, Wynn Macau and Las Vegas operations.

On the development front, Wynn Resorts continues to enhance its product with frequent new feature releases. Also, it is advancing its marketing and branding strategy ahead of the upcoming NFL 2021 season.

Penn National Gaming, Inc. (PENN - Free Report) reported strong second-quarter 2021 results, wherein both earnings and revenues not only surpassed the Zacks Consensus Estimate but also improved on a year-over-year basis. Following the results, shares of the company rose 9% during trading hours on Aug 5.

The company is confident about its long-term growth strategy and Barstool profits. Following its Indiana launch during May 2021, the company expects to more than double its footprint by the start of the 2021 NFL season in early September, primarily on the back of upcoming launches in Colorado, New Jersey, Tennessee, Virginia and Arizona. Penn National is optimistic about expanding its operations to at least 10 states by the end of 2021.

Blake Sartini, chairman and CEO of Golden Entertainment, said, “Our second quarter operating results demonstrated improvement over our first quarter, as we generated record quarterly levels of revenue, net income and Adjusted EBITDA. These results highlight strong levels of visitation and spend at all of our properties, including The STRAT, combined with the margin improvement we have sustained over the last twelve months.”

The following table shows the price movement of the major gambling stocks in the last week and the last six months: 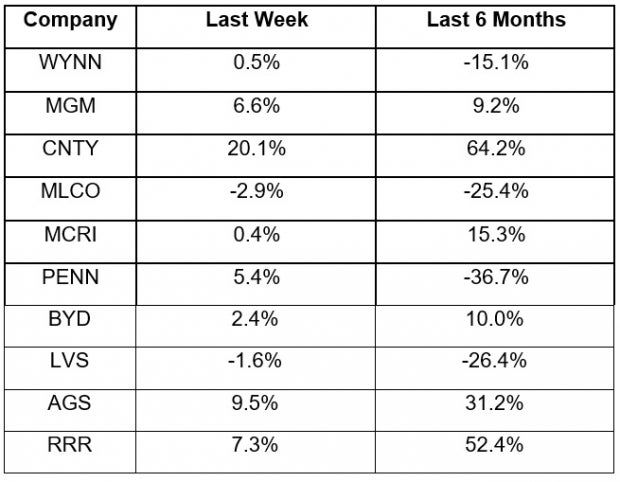 In the past five trading sessions, shares of Century Casinos, Inc. (CNTY - Free Report) have appreciated the most.