Biohaven Pharmaceutical (BHVN - Free Report) incurred loss of $3.23 per share in second-quarter 2021, wider than the Zacks Consensus Estimate of a loss of $2.77 as well as the year-ago loss of $3.08.

Adjusted loss, which excludes non-cash stock-based compensation and few other non-cash expenses, for the second quarter was $2.62 per share compared with $2.55 in the year-ago period. The dismal bottom-line performance was due to higher operating expense during the quarter.

Total revenues, solely from Nurtec ODT, were $92.9 million in the second quarter, up almost 112.1% sequentially. Revenues were in line with the Zacks Consensus Estimate. The company recorded revenues of $9.7 million in the year-ago quarter. Please note that the company had launched Nurtec ODT in March 2020.

Shares of Biohaven have gained 45.4% so far this year compared with the industry’s increase of 1.8%. 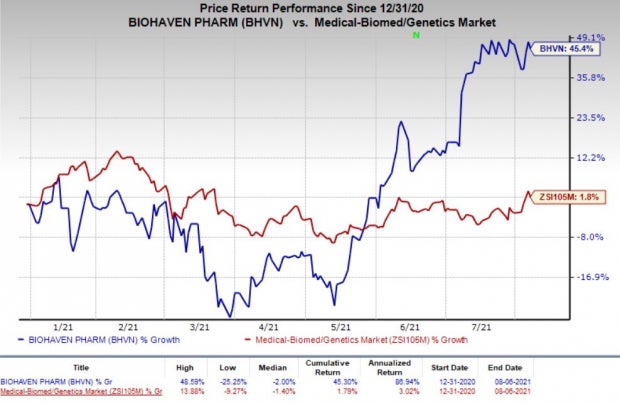 Research and development (R&D) expenses, including stock-based compensation, were $77.4 million in the quarter, up 82.5% year over year driven by higher clinical activities.

Selling, general and administrative (SG&A) expenses were $170 million in the quarter, up 36.3% from the year-ago period. The significant increase in SG&A expense was driven by higher costs to support the commercialization of Nurtec.

Biohaven stated that its oral anti-CGRP drug, Nurtec ODT, has demonstrated strong uptake since its launch in March 2020. Sales of the drug increased during the first half of 2021 despite COVID-19 related disruptions. The drug’s sales during the second quarter were driven by growth in volumes as well higher net price.

A phase III study evaluating verdiperstat as a potential treatment for multiple system atrophy (“MSA”) is ongoing. Top-line data from the MSA study is expected later this quarter. The candidate is also being evaluated as a potential treatment for amyotrophic lateral sclerosis (“ALS”) in a clinical study being conducted at Massachusetts General Hospital by Healey Center. Biohaven expects to complete enrollment in ALS study in the fourth quarter of 2021.

A phase III study is currently evaluating troriluzole in patients with spinocerebellar ataxia. Top-line data is expected in the fourth quarter of 2021 or early 2022. The company is also developing the candidate as a potential treatment for obsessive compulsive disorder (“OCD”) in two identical phase III studies. Top-line data from these studies are expected in the second half of 2022.

A phase III study is evaluating intranasal zavegepant as an acute treatment of migraine. Top-line data from the study is expected later in 2021.