Total revenues increased 147.1% year over year to $136.5 million, primarily driven by milestone payments from ViiV Healthcare and J&J (JNJ - Free Report) , and higher royalty revenues. The top line also beat the Zacks Consensus Estimate of $104 million. Based on encouraging quarterly results in the first half of 2021, the company also raised its guidance for 2021.

Halozyme’s stock was up 10% in after-market trading on Aug 9, following the robust second-quarter results and improved guidance. However, the stock has declined 5.3% this year so far compared with the industry’s 1.8% decrease. 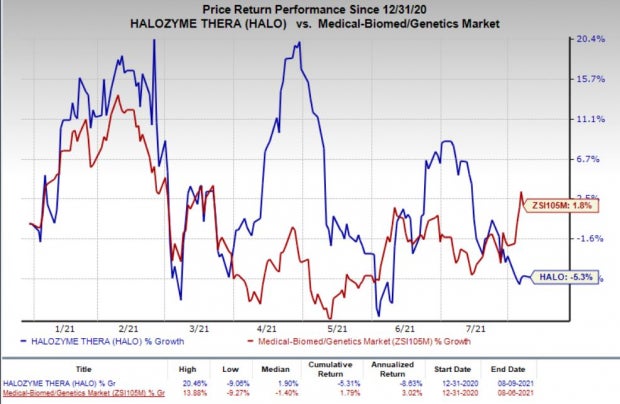 Several companies are using Halozyme’s ENHANZE technology for developing subcutaneous formulation of their currently marketed drugs. The company has five marketed partnered drugs based on this technology.

Royalty revenues were $45.8 million in the second quarter, up 188.9% from the year-ago quarter, mainly driven by strong sales uptake of J&J’s subcutaneous Darzalex (Darzalex SC). In June, J&J’s drug received two label expansions in Europe in newly diagnosed adult patients with systemic light chain and in relapsed or refractory multiple myeloma. This was followed by a label expansion in the United States to include patients with multiple myeloma after first or subsequent relapse. Robust demand of the drug and multiple label expansions are likely to drive Halozyme’s strong royalty revenues.

Product sales, solely from the sale of bulk API to collaborators using the ENHANZE platform for drug development, were $30.4 million in the quarter compared with $6.3 million in the year-ago quarter. The increase was driven by higher bulk API sales to ENHANZE partners, J&J and Roche (RHHBY - Free Report) .

Revenues under collaborative agreements were $60.3 million, up 82.6% year over year. In June, Halozyme signed an agreement with ViiV Healthcare, the HIV-arm of GlaxoSmithKline (GSK - Free Report) , granting the latter access to its ENHANZE technology. Halozyme recorded an upfront payment of $40 million under the deal during the second quarter. The company also recorded $20 million in milestone payment related to Darzalex SC during the reported quarter. These payments drove the revenues under collaborative agreements.

Research and development ([R&D] including stock-based compensation) expenses declined 10% year over year to $8.1 million mainly due to discontinuation of oncology drug development efforts and lower development activities related to PEGPH20. This decline was partially offset by higher costs to support additional ENHANZE targets.

Selling, general and administrative ([SG&A] including stock-based compensation) expenses were $12.3 million, up 11.8% from the year-ago period.

Halozyme raised its previously issued guidance for revenues and earnings for 2021. The company expects total revenues in 2021 to be between $425 million and $445 million, indicating year-over-year growth of 59%-66%. Previously, the company expected revenues to be between $375 million and $395 million. The increase in guidance was on the back of higher anticipated royalties, especially related to Darzalex SC, and signing of new agreement with ViiV Healthcare.

The company expects revenues from royalties to more than double year over year on the back of strong uptake of subcutaneous formulation of J&J’s Darzalex and growth in Roche’s Phesgo. Product sales are expected to increase 70% to 80% from 2020 levels.