MVB Financial Corp. (MVBF - Free Report) has raised its quarterly cash dividend yet again. The company announced a dividend of 14 cents per share, representing a hike of 16.7% from the prior payout. The dividend will be paid out on Sep 15 to shareholders of record as of Sep 1.

Considering last day’s closing price of $43.07 per share, the dividend yield is currently valued at 1.30%.

Prior to this hike, the company raised its quarterly dividend in May 2021 by 20% to 12 cents per share. Since 2017, it has been increasing dividends annually.

This reflects the company’s robust cash-generation competencies and its commitment toward enhancing shareholder value.

MVB Financial’s president and CEO, Larry F. Mazza, stated, “MVB’s payment of a growing cash dividend is a key point of differentiation relative to the vast majority of the company’s tech-forward bank and pure Fintech peers.”

So far this year, shares of the company have gained 89.9%, significantly outperforming the industry’s rise of 13.5%. 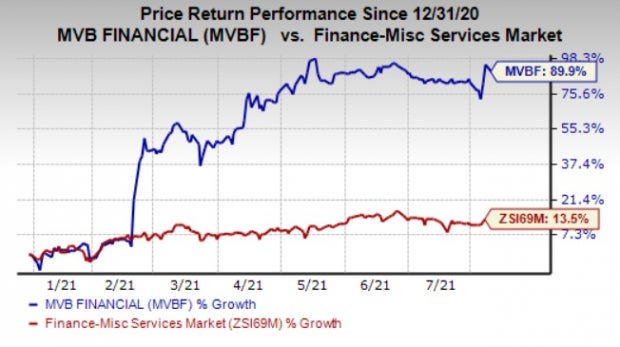 Currently, MVB Financial carries a Zacks Rank #2 (Buy). Investors interested in this stock can have a look at its fundamentals and growth prospects mentioned below.

Earnings: Over the past three-five years, MVB Financial’s earnings witnessed growth of 59.2%, significantly higher than the industry average of 12.3%. While earnings are expected to decline 25.8% this year, the same is projected to witness growth of 4.9% in 2022.

The company has a decent earnings surprise history. Its earnings surpassed the Zacks Consensus Estimate in three of the trailing four quarters, the average beat being 67%.

Return on Equity (ROE): MVB Financial’s ROE currently stands at 15.09%, which compares favorably with the industry average of 9.86%. This highlights that the company utilizes cash more efficiently than peers.

In the past few months, several finance companies have raised their quarterly dividends.

Bank of America (BAC - Free Report) also raised its dividend by 17% to 21 cents per share.