fuboTV Inc. (FUBO - Free Report) reported second-quarter 2021 adjusted loss of 68 cents per share, much narrower than the reported loss of $2.08 per share in the year-ago quarter. 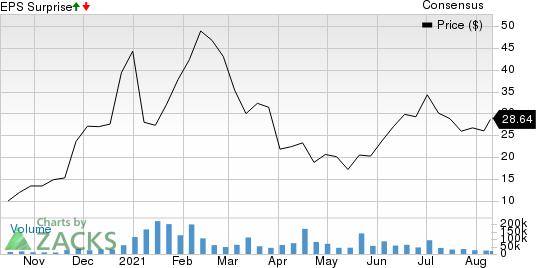 Aided by the company’s carriage agreement with Disney Media Networks and ESPN, fuboTV has one of the strongest football offerings in the market and is the only live streaming TV platform with every NFL in-market game and every college conference network.

Markedly, 94% of content was viewed on a big-screen connected TV and 89% of viewing was for live content.

Subscriber-related expenses totaled $120.9 million, an increase of 127% year over year, primarily driven by growth in subscribers.

The company reported a net loss attributable to common stockholders of $94.9 million in second-quarter 2021.

Adjusted EBITDA loss was $47.4 million compared with $40.4 million loss in the year-ago period.

The company ended the second quarter of 2021 with $412.1 million of cash, cash equivalents and restricted cash. This included the repayment in full of the $18.1 million senior secured loan with AMC Networks.

Operating cash flow in the quarter was negative $33.6 million, improving $20.2 million compared to the first quarter of 2021.

Third-quarter end-of-period subscribers are estimated to be between 810K and 820K, up 79% year over year at the midpoint.

FuboTV expects total year-end subscribers between 910K-920K, indicating an increase of 67% year over year at the midpoint. This subscriber outlook implies full-year 2021 net additions of at least 367K, up 58% from 2020 net additions of 232K.

The long-term earnings growth rate for Microsoft, Cadence Design and Texas Instruments is currently pegged at 11.09%, 11.68% and 9.33%, respectively.

What's in the Offing for CyberArk's (CYBR) Q2 Earnings?