The Boston Beer Co. Inc. (SAM - Free Report) and PepsiCo Inc. (PEP - Free Report) unveiled plans to enter a partnership to bring a breakthrough, catering to the evolving tastes of drinkers. As part of the arrangement, the companies plan to launch Hard Mountain Dew alcoholic beverages in the United States, an alcoholic version of PepsiCo’s most popular brand. The partnership will combine Boston Beer’s top-notch innovation and proficiency in alcoholic beverages with PepsiCo’s multi-billion-dollar Mountain Dew brand and marketing expertise.

The Hard Mountain Dew will be launched in bold flavors, including original, watermelon and black cherry. It is expected to come with an Alcohol by Volume (ABV) of 5% and marketed alongside other alcohol beverages to adults of legal drinking age. Per the partnership, Boston Beer will craft and produce the Hard Mountain Dew, while PepsiCo will be responsible for selling, delivering and merchandising products through its newly set up entity. The Hard Mountain Dew is likely to hit store shelves in the United States by early 2022.

Boston Beer is known for its expertise and experience in brewing the best-tasting hard seltzers and hard teas, including brands like Truly and Twisted Tea. Meanwhile, PepsiCo is a leader in the non-alcoholic beverage space, with brands like Gatorade, Pepsi-Cola, Quaker, Tropicana, and SodaStream in its kitty. The partnership between the two market leaders demonstrates the companies’ passion for pushing boundaries to deliver what consumers want. The Hard Mountain Dew will be Boston Beer’s notable innovation in the hard seltzer space, joining its Truly hard seltzer brand. 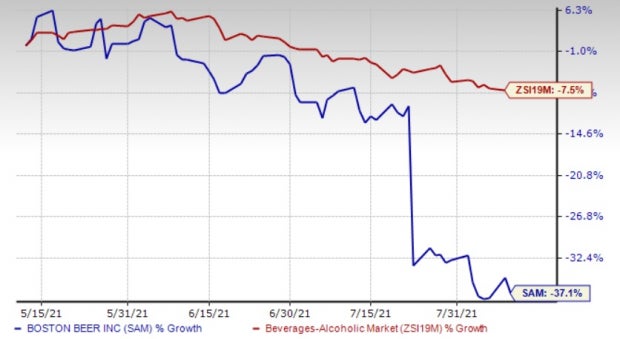 On Aug 4, 2021, PepsiCo decided to offload its juice businesses, including Tropicana, Naked and other select juice brands across North America and Europe in a quest to expand its profitable portfolio of brands. The company agreed to sell the aforementioned businesses to Paris, France-based PAI Partners for $3.3 billion in cash. The decision to sell the juice business came after an evaluation of its operating margins, which have been witnessing soft trends over the past decade. 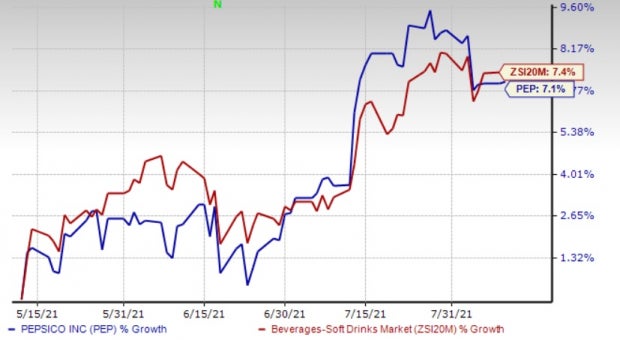 Shares of Boston Beer have declined 37.1% compared with the industry’s 7.5% fall in the past three months. PepsiCo has gained 7.1% in the past three months compared with the industry’s 7.4% growth. Boston Beer currently has a Zacks Rank #5 (Strong Sell). PepsiCo carries a Zacks Rank #3 (Hold) at present. You can see the complete list of today’s Zacks #1 (Strong Buy) Rank stocks here.

What's in the Offing for CyberArk's (CYBR) Q2 Earnings?