The company’s performance in the second quarter was adversely impacted by decline in comparable store sales, stemming from dismal traffic trends. Adverse impacts from inflation also acted as a downside. Management expects comparable store sales to remain dismal in the third quarter as well. Shares of Grocery Outlet fell nearly 2.4% in the after-hour trading session on Aug 10, following the quarterly announcement. The company’s shares have declined 6.4% in the past three months, compared with the industry’s rise of 6%.

Nevertheless, the company continues to navigate through changing consumer behavior on the back of its strategic growth efforts. Management is building on the underlying strength of the business across areas such as opportunistic supply, product assortments as well as engagement with customers and independent operators. It is also striving to expand stores and undertake prudent marketing initiatives. This Zacks Rank #3 (Hold) company remains confident regarding its long-term growth objectives.

The owner and operator of grocery store chains delivered adjusted earnings of 23 cents a share, in line with the Zacks Consensus Estimate. The bottom line plunged 27.1% from 32 cents reported in the prior-year quarter.

Net sales of $775.5 million surpassed the Zacks Consensus Estimate of $770.5 million. The top line fell 3.5% from the year-ago quarter’s level. The downside was partly offset by sales contribution from 38 net stores opened since the end of the second quarter of last year.

Comparable store sales (comps) went down 10% against a rise of 16.7% witnessed in the prior-year quarter. Dismal comps performance reflects decline in average ticket and lower traffic. Sequentially, traffic was moderately up in the second quarter.

Gross profit dropped 6.3% year over year to $237.8 million. Also, gross margin contracted 90 basis points (bps) to 30.7% due to the impacts of inflation and normalization of inventory turns. During the quarter, adjusted EBITDA tumbled 15.7% to $50.8 million. 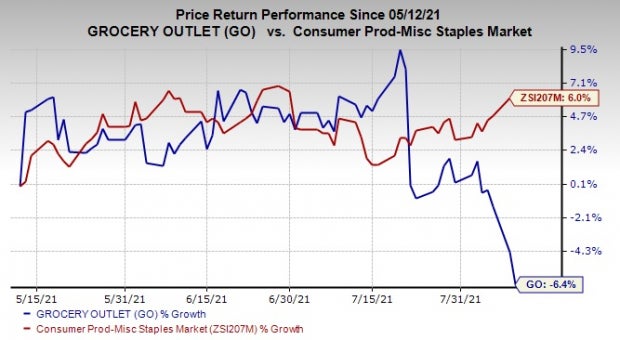 Grocery Outlet opened 11 new stores during the quarter, taking the total count to 400 stores in six states. Management remains pleased with the performance of newly-opened stores.

The company intends to open 36-38 stores and close one during 2021. Well, it remains consistent with its 10% annual target.

The company incurred capital expenditures $29.9 million (excluding tenant improvement allowances) during the second quarter. It continued to invest in new and existing store fleet as well in infrastructure and technology developments.

Management continues to envision capital expenditures (net of tenant improvement allowances) of about $130 million for 2021.

Management highlighted that sales trends in the third quarter are consistent with the second quarter, including similar traffic and ticket patterns. On a quarter-to-date basis, comps are down 6%. Management expects such trends to persist through the third quarter and thereby anticipates comps to be in the negative mid-single digits. With limited visibility, the company expects comps in the fourth quarter to be consistent with third-quarter levels, on a 2-year stack basis.

Gross margin in the third quarter is expected to be at nearly 30.6%, reflecting higher inflationary headwinds in commodity and freight costs. The company projects adjusted EBITDA margin at nearly 6.5% of sales for the third quarter.

Albertsons Companies, Inc. (ACI - Free Report) has a long-term earnings growth rate of 12% and a Zacks Rank #2 (Buy). You can see the complete list of today’s Zacks #1 Rank stocks here.

Darling Ingredients Inc. (DAR - Free Report) , with a Zacks Rank #2, delivered an earnings surprise of 29.8% in the last four quarters, on average.