In the past week, Southwest Airlines’ (LUV - Free Report) management stated that it will be difficult for the company to be profitable in the September quarter as bookings in recent times are being affected by the spread of the Delta variant of the coronavirus. The current stance is therefore in stark contrast to the commentary made last month, which suggested that the company expects to be profitable in the third and the fourth quarter of 2021.

Delta Air Lines (DAL - Free Report) also grabbed headlines in the past week by announcing that it intends to resume flying to London from Seattle and Detroit this October onward. The move is part of the Atlanta, GA-based carrier’s efforts to rebuild its international network.

1.In a regulatory filing, Southwest Airlines presented a grim picture with respect to close-in bookings and cancellations for the current month as the rapid spread of the Delta variant is hurting air-travel demand big time. As a result of this deadly strain, the presently Zacks Rank #3 (Hold) Dallas-based carrier, which was profitable in July, now expects its August 2021 operating revenues to decline in the 15-20% band from the August 2019 actuals. The current estimation is worse than the previous outlook of a 12-17% decline, which was issued last month. Assuming the current trend to continue at least in the near term, Southwest Airlines expects operating revenues for the month of September and third-quarter 2021 to decline in the 15-25% and 15-20% ranges, respectively, from the levels achieved in the comparable period of 2019. Load factor (% of seats filled by passengers) is likely to be between 80% and 85% compared with the third-quarter 2019 actuals. Third-quarter capacity is anticipated to be comparable to third-quarter 2019 actuals. The company continues to expect its non-fuel unit costs for the September quarter to increase in the 1-5% range from the third-quarter 2019 reading. The airline still estimates economic fuel costs per gallon in the range of $2.05-$2.15 for the September quarter.

3. Copa Holdings’ traffic, measured in revenue passenger miles, declined 42.1% to 1.14 billion in July 2021 from the level recorded in the comparable period of 2019 as air-travel demand continues to be below the pre-pandemic level despite improving.

With this tepid demand, capacity, measured in available seat miles (ASMs), fell 36.4% from the 2019 level to 1.44 billion. With traffic declining more than the amount of capacity contraction, load factor deteriorated 780 basis points to 78.8% in July.

4. Delta aims to resume services from Seattle (thrice a week) and Detroit (four times a week) to Heathrow on Oct 7 and Oct 11, respectively. In addition, the carrier’s existing daily service between New York and Heathrow will increase to twice daily from Oct 6. To travel to London, passengers will need to provide proof of vaccination along with a negative test report (taken within three days after departure from the United States). To return to the United States, passengers only need to provide a negative test report as an evidence (taken within three days of departure from London).

5. In a bid to modernize its fleet, SkyWest (SKYW - Free Report) entered into an agreement with Delta to purchase and operate 16 new E175 aircraft. The deal falls under a multi-year capacity purchase pact between the partners. The first of the 76-seater planes is scheduled to be delivered in the second quarter of next year. SkyWest will purchase the planes from the Brazilian aerospace company Embraer to ply under the Delta network. Currently, SkyWest operates 71 E175 jets for Delta.

The update on 16 new E175 jets apart, SkyWest was in news recently when it reported better-than-expected earnings per share for second-quarter 2021. The earnings beat was mentioned in the previous week’s write up. 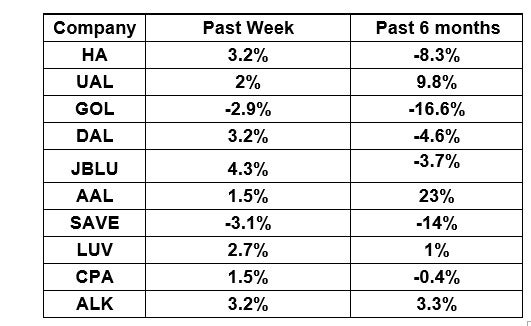 With the Delta variant denting air-travel demand, we expect more U.S. carriers to follow Southwest Airlines and adjust their views for the September quarter.