Revenues were $134.6 million for the reported quarter, up roughly 29% year over year. It also surpassed the Zacks Consensus Estimate of $117.5 million. The company saw higher sales across its domestic and international businesses in the reported quarter. It benefited from strong market demand in the quarter.

Sales from the U.S. non-crop business jumped 55% year over year to around $21.5 million.

Revenues from international businesses rose 10% year over year at $50.5 million. The company benefited from the newly acquired businesses — AgNova in Australia and the Agrinos biologicals business.

Moving ahead, American Vanguard said that it is well placed in domestic and international markets. The company reaffirmed its earlier outlook for 2021. It sees low double-digit revenue growth and comparatively stronger growth in both net income and EBITDA factoring in favorable market conditions. American Vanguard also expects these factors along with well-managed operating expenses to further strengthen its balance sheet.

American Vanguard’s shares are up 2.1% over a year, compared with the 24.9% rise of the industry it belongs to. 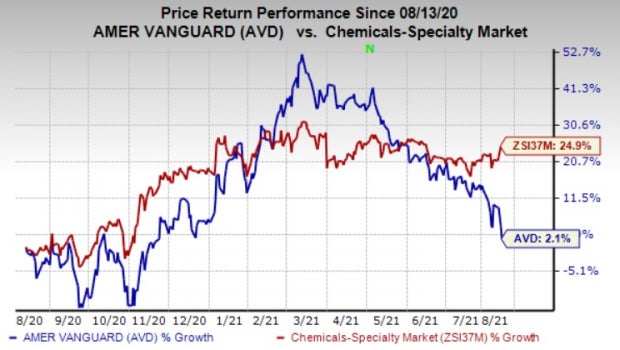 Nucor has a projected earnings growth rate of 455.7% for the current year. The company’s shares have surged around 175% in a year.

ArcelorMittal has an expected earnings growth rate of 1,731.2% for the current year. The company’s shares have shot up around 199% in the past year.

LyondellBasell has an expected earnings growth rate of around 254.6% for the current year. The company’s shares have gained roughly 52% in the past year.