Flowers Foods, Inc. (FLO - Free Report) delivered second-quarter fiscal 2021 results, wherein the top and bottom exceeded the Zacks Consensus Estimate, though both the metrics declined year over year. Nonetheless, results remained above the pre-pandemic levels and management remains confident about the company’s future potential, thanks to its four strategic pillars. Flowers Foods raised its earnings per share guidance range for fiscal 2021, alongside pulling up the lower end of the sales view. Shares of the company gained 3.4% in the after-market trading session on Aug 12.

Adjusted earnings per share (EPS) of 32 cents came in ahead of the Zacks Consensus Estimate of 28 cents. The bottom line declined nearly 3% from 33 cents reported in the year-ago period.

Sales dipped 0.8% to $1,017.3 million, though the figure surpassed the Zacks Consensus Estimate of $1,009 million. We note that the metric compares with record results posted in the year-ago period, which saw elevated pandemic-led demand. 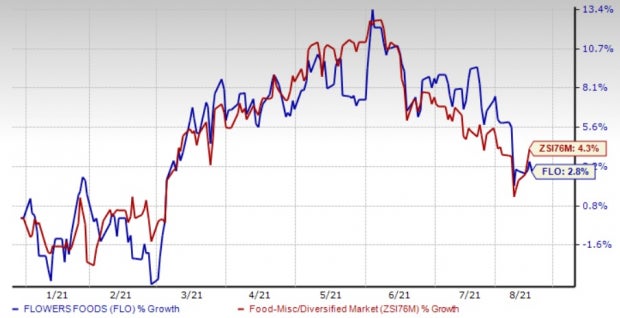 Materials, labor, supplies and other production expenses (excluding depreciation and amortization), as a percentage of sales, expanded 20 basis points (bps) year over year to 49.5%. The upswing can be attributed to moderating sales as well as higher returns of unsold products. This was somewhat negated by favorable comparisons with the year-ago quarter, which included $1.5 million in start-up costs related to the conversion of the company’s Lynchburg, VA facility to an organic bakery. The company saw increased commodity costs, partly made up by improved price/mix and better promotional efficiency.

The company ended the reported quarter with cash and cash equivalents of $292.3 million and long-term debt of $889.9 million. Stockholders’ equity amounted to $1,425.1 million.

On a year-to-date basis till the second quarter of fiscal 2021, the company’s cash flow from operating activities amounted to $223.4 million, while it incurred capital expenditures of $58.3 million.

Flowers Foods paid out dividends worth $87 million in the aforementioned period and has 6.1 million shares remaining under the ongoing repurchase program. Capital expenditures are projected in the range of $125-$135 million for fiscal 2021.

While the fiscal second-quarter results declined year over year, it came ahead of pre-pandemic levels and the company continued witnessing market share gains. Management is impressed with its performance, which was powered by the company’s leading brands and continued investments toward enhancing sales and optimizing network. The company remains encouraged about Flowers Foods’ future potential, thanks to focus on its four key strategies. These include developing its team; undertaking prudent M&A activities; concentrating on brands and prioritizing margins.

The company expects net interest expenses of about $8 million and an effective tax rate of nearly 24.5% for the fiscal year.

J&J Snack Foods (JJSF - Free Report) sports a Zacks Rank #1 (Strong Buy), at present, and its bottom line outpaced the Zacks Consensus Estimate by a wide margin in the preceding four quarters, on average. You can see the complete list of today’s Zacks #1 Rank stocks here.