MGM Resorts International (MGM - Free Report) is benefiting from pent-up consumer demand, high domestic casino spend and robust demand for sports betting. The company is focusing on asset light strategy. In the past year, the company’s shares have surged 86.7%, compared with the industry’s rally of 23.7%. Let’s delve deeper.

The company witnessed pent-up consumer demand and high domestic casino spend in second-quarter 2021. The company announced that 11 of it 17 properties witnessed all-time record quarters and slot gross win. In Las Vegas, the company’s revenues are back to normal owing to leisure and domestic casino customers. Net revenues at Las Vegas Strip Resorts in the second quarter were $1 billion, up a whopping 566% year over year on account of easing of operational and capacity restrictions, and increase in travel due to the relieving of cross-border restrictions over time.

It has been focusing on asset light strategy. In July, 2021, the company announced two separate deals with Infinity World Development Corp and Blackstone. Firstly, MGM Resorts has entered into a definitive agreement with Infinity World Development Corp to acquire the remaining 50% stake in its JV — CityCenter Holdings, LLC. Quoted at $2.125 billion, the price reflects an implied valuation of $5.8 billion (based on net debt of $1.5 billion), after giving effect to the recently-closed sale of a two-acre parcel land. With this transaction, MGM Resorts will become the sole owner of the urban complex comprising Aria Resort and Casino as well as Vdara Hotel and Spa. Secondly, the company entered into an agreement with Blackstone to monetize the Aria and Vdara real estate assets. In May 2021, it announced an agreement to sell and lease back MGM Springfield, underlying real estate to MGM Growth Properties. 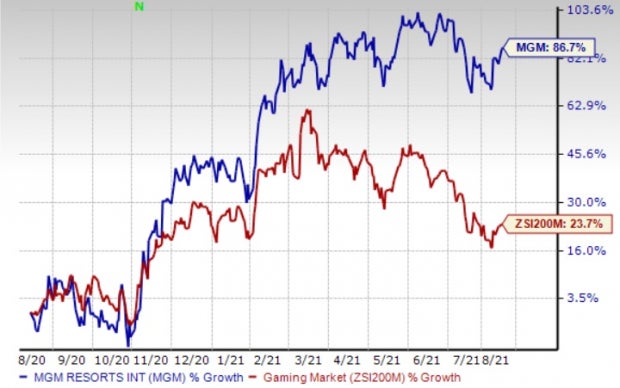 Sports betting and iGaming continues to be a major growth driver for the company. BetMGM continues to gain market share. On its second-quarter 2021 conference call, the company announced that BetMGM is the No. 2 operator in the space nationwide and its market share in live markets increased to 24%. BetMGM continues to be a leader in iGaming space, with market share reaching 30% in second-quarter 2021. In the second quarter, 15% of BetMGM's fresh players were from MGM and 31% of MGM M life sign-ups came from BetMGM. BetMGM operations contributed $194 million to net revenues in the second quarter, up 19% sequentially.

Boyd Gaming has a three-five year earnings per share growth rate of 40.8%.

Red Rock has a trailing four-quarter earnings surprise of 228%, on average.