As part of the efforts to expand its wealth management business in Asia, HSBC Holdings (HSBC - Free Report) has agreed to acquire 100% of the issued share capital of AXA Insurance in Singapore for $575 million. Completion of the deal, expected in the fourth quarter of 2021, is subject to regulatory approval, following which, the operations of HSBC Life Singapore and AXA Singapore are intended to be merged.

The transaction will likely be funded using existing resources. It is expected to have a minimal impact on HSBC’s common equity tier 1 ratio, while being immediately accretive to the group’s earnings following completion.

HSBC’s CEO, Noel Quinn, stated, “This is an important acquisition that demonstrates our ambition to grow our Wealth business across Asia. Wealth is one of our highest growth and highest return opportunities, and plays to our strengths as an Asia-centred bank with global reach. We are acquiring a good business that fits well with our existing operations, and which strengthens our status as one of Asia’s leading wealth and insurance providers.”

Nuno Matos, the CEO of HSBC Wealth and Personal Banking, added, “This strategic investment is a key milestone for HSBC Life to materially scale up, grow and diversify our insurance and wealth business in Singapore. The proposed acquisition will immediately put us in a leading position in health and employee benefits, and accelerate our build out of a distinctive and holistic wealth and health planning business, operating beyond our branch network.”

In February, HSBC announced that it is on an expansion spree in Asia, and it plans to inject $3.5 billion worth of capital into its wealth and personal banking business in Asia, of which approximately two-thirds will be used to bolster its distribution competencies via new hires and technology improvements.

The bank has also stated plans of shifting capital from the underperforming businesses in Europe and the United States to Asia.

HSBC’s Asia operations account for almost two-thirds of its adjusted profit before tax in the wealth and personal banking business.

So far this year, shares of HSBC have gained 9.7% compared with the industry’s growth of 17.5%. 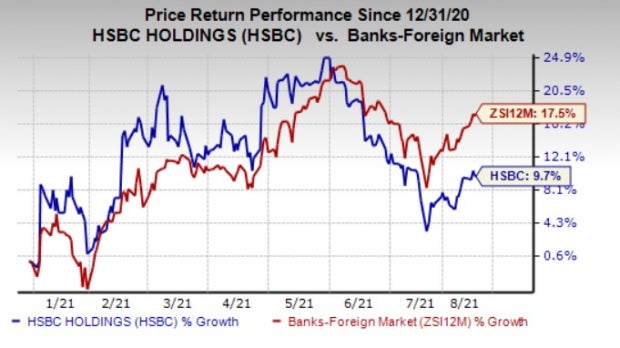