Eni SpA (E - Free Report) recently announced that it has commenced production from the Cuica field, located offshore Block 15/06 in Angola. This is a milestone for the Italy-based energy giant as it took only a little more than four months to bring the discovery into production.

Eni discovered the Cuica field this March. The company’s Infrastructure Led Exploration principle is supporting its exploration success in Angola and other places. The latest development further strengthened the company’s presence in the country, wherein it produced 37 million barrels of oil equivalent last year. Eni’s exploration campaign offshore Angola led to several major discoveries that are expected to hold billions of barrels of oil.

The company is using the Armada Olombendo floating production storage and offloading (FPSO) vessel for producing hydrocarbons from the Cuica field. Production from the field is likely to boost and sustain the vessel’s output plateau. Water depth at the site is 500 meters and the well is tied back to the existing Cabaça North subsea production system infrastructure. The FPSO unit can produce 100,000 barrels of oil per day.

Apart from the Cuica field, the vessel is receiving hydrocarbons from several other sites including Cabaça and Cabaça South East. Earlier, the company suggested that the deep offshore Cuica field is expected to hold 200-250 million barrels of oil in place.

Eni’s shares have increased 11.2% in the past six months compared with 9.1% rise of the industry. 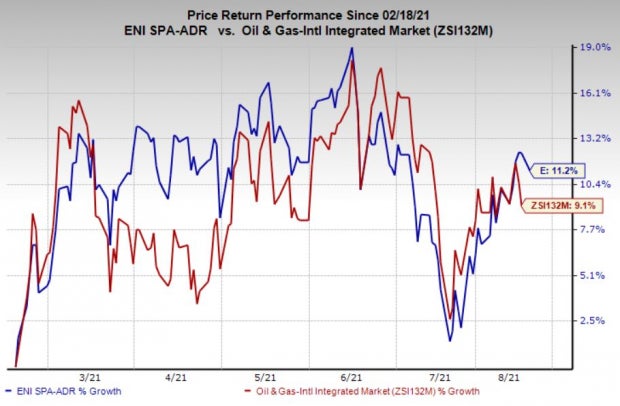 The Zacks Consensus Estimate for Range Resources’ earnings for 2021 is pegged at $1.53 per share, indicating a massive improvement from the year-ago loss of 9 cents.

Equinor’s bottom line for 2021 has witnessed three upward estimate revisions and no downward movement in the past 60 days.