Legendary investor Warren Buffett is well known for his profitable equity investments. By dint of his investment acumen that sees him picking up the stocks of companies with strong performances and holding them for the long term, Buffett has been able to multiply his returns manifold.

In this piece, we are going to discuss his holdings of payment processing stocks and whether the same should be a key component of your portfolio as well. Other than the payment processor and credit card company American Express, which comprises 18.8% of the total equity investment portfolio, Mastercard Inc. (MA - Free Report) and Visa Inc. (V - Free Report) hold a share of 0.5% and 0.6%, respectively.

These payment facilitators were part of our everyday lives even before the pandemic had struck. They grew increasingly indispensable after online shopping became the sole option in the face of the pandemic. The ownership of even a fraction of their shares with Buffett as a strong supporter gives enough credence to their prospects.

The payment companies experienced a lukewarm year in 2020 as the overall spending levels declined due to the postponement of discretionary spending in the wake of rampant uncertainties surrounding the job market as well as businesses at large. But the year 2021 marks a revival of the same as pent-up consumer spending increased purchases. Since most of the spending is still being done online and involves the usage debit/credit cards as well the card network for making all transactions successful, these companies are witnessing strength in business.

Moreover, these companies are pure plays that are highly dependent on growth in e-commerce and digital payments.

With their established brand names, worldwide acceptance, secured payments platform, strong capital position and a continued investment in technology, each of the following three stocks is poised to grow from their digital transformation.

Visa is one of the leading payment processors in the world with highest payments volume processed followed by Mastercard, American Express and Discover Financial Services. After seeing a revenue decline of 5% in 2020, the same has grown 4.8% so far this year on higher payments volume (the primary driver for service revenues) and the number of processed transactions (the primary driver for data processing revenues), reflecting improving operating conditions.

Cross-border business on which Visa has heavy reliance is also improving as the rate of decline is slowing down.

Visa continues to ink deals with banks, lenders and other merchants to expand its market share. It is investing in areas where future growth lies. . Recently, it announced that it will acquire the fintech company Tink of Europe, which will give it a leg up in the fast growing open banking space. Visa is also seeing an enduring growth potential in cryptocurrencies. The company allowed customers to make their transactions in USD Coin (USDC), a stable coin powered by the Ethereum blockchain.

The company is committed to supporting these initiatives so they can be integrated into the existing payments ecosystem. This will fuel growth for the stock.  Thus holding Visa for long term will help investors gains grow along with the company’s growth. 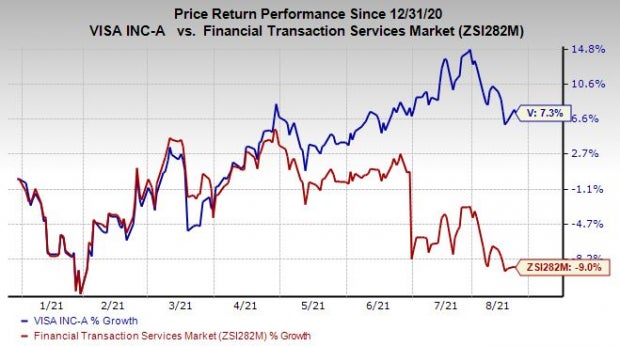 Mastercard has shown an impressive performance so far with revenues growing despite cross-border travel being in the early stages of recovery. This reflects the strength of its diversified revenue streams.

The company continues to partner with several banks and merchants to expand its presence in the payments industry. It also entered the buy-now-pay-later space and to this end, partnered with Citi and the Commonwealth Bank of Australia.

It continues to collaborate with major digital players to enhance its digital capabilities. Its recent alliance with Stripe is in sync with this strategy.

In addition to organic growth, a number of acquisitions in the digital space place it well for better performance. With the acquisition of Corporate Services business of Nets Denmark, Ethoca, RiskRecon, NuData and Ekata under its belt, the company is set for growth in the promising new areas, such as open banking, digital identity and real-time payments.

An asset light model, a solid balance sheet and an expanding presence in the growing payments industry makes the stock an ideal to hold  for the long haul for strong returns. Good news is that investors who held it over the last five years have gained a good 281%. Over this time, the S&P has gained 107%.

The stock has a Zacks Rank of 3 at present and gained 1.8% year to date. 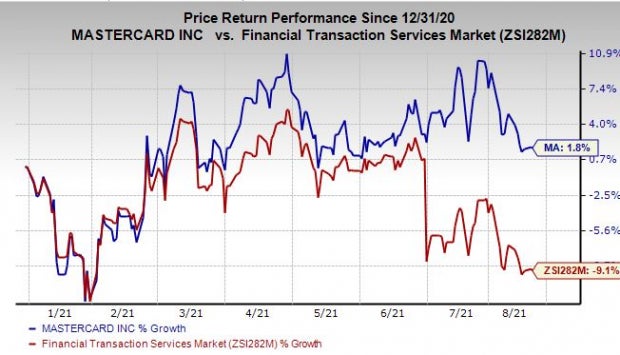 American Express has been part of Buffett’s investment portfolio for more than 25 years. The veteran investor repeatedly emphasized the value of the American Express brand.

The company has been among the best performing stocks of the Dow Index this year so far. The stock hit a 52-week high in July after reporting solid earnings on the back of growth in spending via its cards.

American Express  shares  the same business space with Visa and Mastercard but operates with a different model. It issues cards directly to consumers rather than the third parties and also provides loans. Thus, the company shoulders default risk,  in case the borrower does not repay back the loan, which is not the case with the former two companies.

Nevertheless, the company targets premium consumers who have the propensity to spend about three times more than that of its rival networks. Its customers are a loyal base who are also accustomed to the luxurious benefits and services provided by the company’s cards.

Bulk of its business comes from spending on travel and entertainment (T&E) and now that this area is witnessing a surge in spending, the company’s business volumes will automatically soar.

The company has partnerships with Delta and Hilton for which it issues co-brand cards. In the most recently reported quarter, volume on these cards increased by double digits from the pre-pandemic levels.

The company is experiencing progress in four strategic areas, such as pending volumes returning to the pre-pandemic levels, customer additions, retention of current customers and growth in merchants.

American Express also made a move in small business banking by acquiring Kabbage, which is an online lender. A large chunk of AmEx’s customers consists of small businesses, which suffered maximum from the pandemic. Now that things are looking up and the small businesses are rebounding, the company’s products are likely to see a surge in demand.

Its strategic initiatives are supported by its strong capital position. It is a well managed company which should fetch strong gains.

The stock is currently Zacks #3 Ranked and has gained 36.2% year to date compared with its industry's growth of 12.6%. 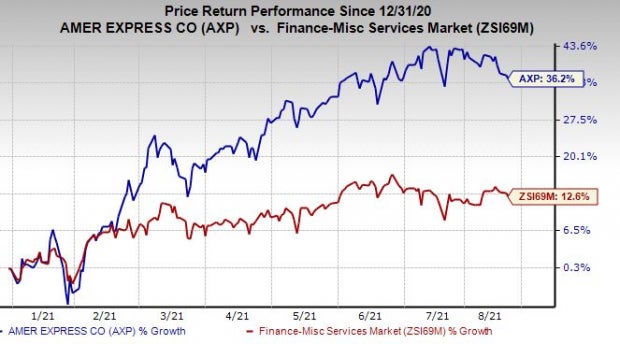 There have been instances when Buffett's equity investments failed. Plus, he missed investing in a few good stocks that could have fetched fortunes for him. But these established payment processors have the resilience to withstand the economic volatility and with their continuous innovation, they will emerge as winners.