U.S. telecom stocks witnessed a relatively flat curve over the past week as an initial surge was offset by a steady downtrend owing to challenging macroeconomic environment. Despite improving economic conditions and federal support through infrastructure investments for the overall sectoral benefit, rising coronavirus cases with the spread of the Delta variant sparked concerns. Speculations of protracted economic recovery owing to mounting inflationary pressures also gained steam as the Fed indicated that it could make a formal decision on scaling back its bond buying program by the year end. All these developments perhaps forced the industry to go on the defensive and negate the early gains fueled by the Senate approval of the $1.2 trillion infrastructure bill.

Tense undercurrents continued to build up in the Sino-U.S. relationship as Beijing aimed to tighten its grip over the technology sector and published detailed rules pertaining to tackling unfair competition and restricting unauthorized usage of user data. Although the rules are primarily based on encouraging a competitive market, the regulations are likely to increase compliance burdens for transaction platforms, making the functioning of U.S.-operated firms more complex. Reports from corporate filings also surfaced that the communist government has taken ownership stakes in domestic social media entities like ByteDance and Weibo. This, in turn, forced Republican Senator Marco Rubio to urge the Biden administration to ban short-form video app TikTok in the United States as ByteDance is its parent company. He argued that the move further portrays the aggressiveness of the Beijing government to infiltrate the domestic telecommunications sector and should be deemed as a potent risk to the Americans. The Commerce Department is already conducting a government-ordered review process to gauge the security concerns posed by China-based apps and is likely to take a note of the alleged ownership issue.

Meanwhile, chip manufacturing firm GlobalFoundries has filed for an IPO with the U.S. regulators to go public by the year end. The purported move annuls a rumored tie-up with Intel as it pledged to boost the output to meet the global chip shortage and announced plans to build a second factory near its Malta, NY headquarters. The Biden administration is also working on plans to lure Taiwan-based Semiconductor Manufacturing Co Ltd to its soil, as it aims to expand overseas amid concern about the potential vulnerability of its operations to mainland China's territorial ambitions. While addressing the global demand-supply imbalance, the increased domestic chip production will likely help the country to shed its export dependency in the long run.

1.     AT&T Inc. (T - Free Report) has expanded 5G connectivity for first responders on FirstNet to ensure that public safety officials have greater access to the connectivity they need to address incidents. First responders in an additional 10 cities across the United States will now have access to 5G. These are Austin, Charlotte, Cleveland, Dallas, El Paso, Houston, Knoxville, Phoenix, Raleigh and San Antonio.

The FirstNet MegaRange, which was launched in January 2021, significantly boosted cellular transmission strength and enabled first responders to operate farther away. It improves coverage issues, whether at the edges of coverage or in dense urban environments. AT&T ESInet has been integrated with the FirstNet network to increase the resiliency of its NextGen 9-1-1 services.

Non-GAAP net income came in at $52.8 million or 22 cents per share compared with $40.8 million or 18 cents per share in the prior-year quarter. The bottom line beat the Zacks Consensus Estimate by 3 cents. Total net revenues in the reported quarter increased 16.6% year over year to $310.9 million and exceeded the company’s guidance of $290-$310 million. The upsurge was primarily driven by continued strength in wireless and fiber, along with robust demand for anti-counterfeiting products. The top line surpassed the consensus estimate of $302 million.

3.     Bell, which is owned by BCE Inc. (BCE - Free Report) , has announced collaboration with Tiny Mile to provide 5G connectivity for the latter’s growing fleet of food delivery robots in downtown Toronto, Canada. Founded in November 2019 and based in Toronto, Tiny Mile is a startup that helps small businesses with affordable delivery. Dubbed “Geoffrey”, Tiny Mile’s remotely operated pink robots use built-in cameras and GPS to navigate the busy streets of Toronto.

By connecting Geoffrey to Bell’s 5G network, Tiny Mile will have access to high definition video telematics data for improving real-time decision making and enhancing safety. Bell is working with the entrepreneurs at Tiny Mile to leverage the exceptional speed and response time of its 5G. The move will enable timely food delivery option for Tiny Mile’s customers with the help of mobile edge computing capabilities.

The microphone offers a unique broadcast-quality sound ranging from a simple whisper to loud and in-game reactions to cater to a wide variety of user profile. It features three pre-selected pick-up patterns for an out-of-the-box experience, including Cardioid – for gaming enthusiasts; Stereo – for vocals and instruments; and Whisper pattern – for the faintest of sound that still needs to be heard.

5.     Nokia Corporation (NOK - Free Report) has announced that its solution has been deployed by Vocus to build the 200G optical links that cover more than 4,100 kilometers between Brisbane and Darwin.

Nokia’s 1830 Photonic Service Switch has been utilized to modernize Vocus’ optical network between Adelaide, Brisbane and Darwin, to deliver 200G with the capacity to provide 300G and 400G in the future. This higher capacity network allows Vocus to provide superior quality services in connecting Darwin to Hypercloud data centers, regional locations and international submarine cables. Nokia’s solution, which is powered by its Photonic Service Engine super coherent digital signal processors, is based on flexible spectrum hybrid architecture. 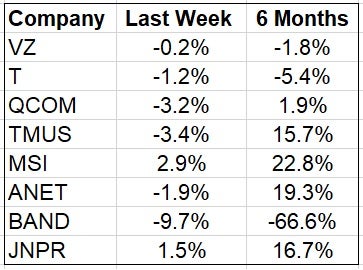 In the past five trading days, Motorola has been the best performer with the stock gaining 2.9%, while Bandwidth declined the most with its stock falling 9.7%.

Over the past six months, Motorola has been the best performer with its stock appreciating 22.8%, while Bandwidth declined the most with its stock falling 66.6%.

Over the past six months, the Zacks Telecommunications Services industry has gained 12.8% and the S&P 500 has rallied 15.1%. 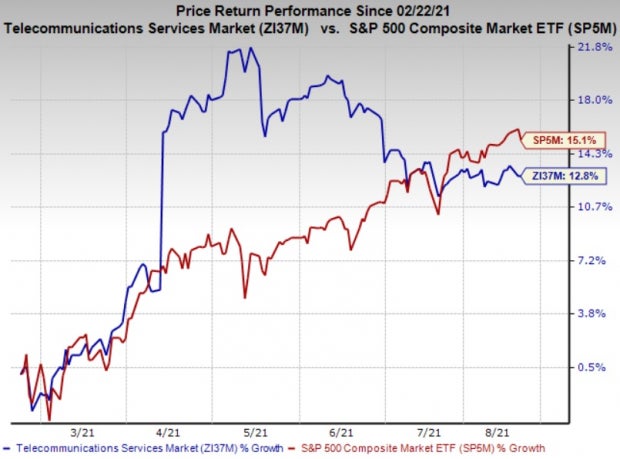 DOW to Invest in Methyl Acrylate Production in Louisiana