The Estee Lauder Companies (EL) Beats on Earnings in Q4

The Estee Lauder Companies Inc. (EL - Free Report) reported impressive fourth-quarter fiscal 2021 results, with the top and the bottom line increasing year over year. Sales and earnings surpassed the Zacks Consensus Estimate. The company saw net sales growth in every region and product category during the quarter. It is also benefiting from impressive online business, as more consumers are shifting to online shopping amid the pandemic.

Net sales of $3,936 million surpassed the Zacks Consensus Estimate of $3,741.1 million. The metric increased 62% (up 56% at cc) from $2,430 million reported in the year-ago quarter. Management highlighted that most retail stores were shut owing to pandemic-led restrictions in the year-ago quarter. During the quarter under review, net sales increased in all regions in which the company operates along with growth in every product categories. Improved foot traffic in regions where brick-and-mortar stores have reopened, solid growth in travel retail and continued strength in online business are upsides.

The company reported operating income of $234 million against an operating loss of $543 million reported in the year-ago quarter.

The company exited the quarter with cash and cash equivalents of $4,958 million, long-term debt of $5,537 million and total equity of $6,091 million.

Net cash flow provided by operating activities for 12 months ended Jun 30, 2021, came in at $3,631 million. The company returned $1.49 billion in cash to shareholders through dividend payouts and share repurchases during this time.

In a separate press release, the company declared quarterly dividend of 53 cents per share on Class A and Class B shares. The dividend will be paid out on Sep 15, 2021 to shareholders of record as on Aug 31.

While most brick-and-mortar retail stores that sell The Estee Lauder Companies’ products (company and customer operated) remained operational — especially in China and the United States — during much of the fourth quarter, there were intermittent shutdowns in the rest of the world.

Many retail stores were temporarily shut at some point in the quarter across the U.K., Continental Europe, Canada, most of Latin America and much of the Asia/Pacific region (except China) owing to resurgence of COVID-19 infections. In places where stores were open globally, traffic was lower than pre-pandemic levels. Apart from these, international travel has been majorly restricted worldwide due to government regulations and consumer health concerns. Such restrictions have been negatively impacting consumer traffic in most travel retail locations. In the wake of the pandemic, the company is on track to undertake stringent cost-control measures.

The company continues to see soft demand for makeup products compared with pre-pandemic levels, thanks to lesser makeup usage occasions and mask-wearing mandates. Nevertheless, demand for skin care, fragrance and hair care categories have been sturdy. 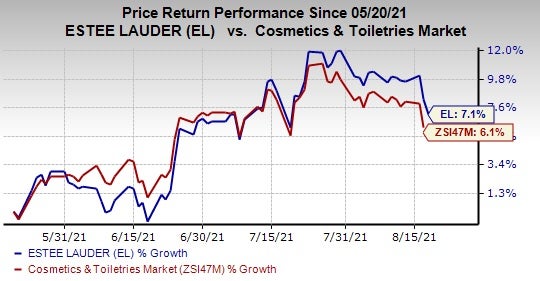 Shares of this Zacks Rank #3 (Hold) company have gained 7.1% in the past three months compared with the industry’s growth of 6.1%.