Bath & Body Works and Victoria’s Secret were formerly parts of L Brands Inc., which split itself into two separate publicly-traded companies to thrive better in an evolving retail landscape. The spin off was completed on Aug 3, subsequent to the completion of the second quarter.

Management highlighted Bath & Body Works business is well positioned for growth in the forthcoming periods, backed by its strong product offerings and customer base. As a standalone company, Bath & Body Works will continue to execute on its long-term growth strategies and boost shareholders’ value.  Management provided its earnings view for third-quarter fiscal 2021.

Shares of the company gained 4.3% during the after-market trading session on Aug 18.

For second-quarter fiscal 2021, adjusted earnings per share amounted to $1.34, which surpassed the Zacks Consensus Estimate for earnings of 75 cents. In the year-ago quarter, the company reported a loss of 18 cents per share. On an adjusted basis earnings amounted to 25 cents in the prior-year quarter. The year-on-year bottom line growth was driven by stronger sales and margins at both Bath & Body Works and Victoria’s Secret.

Net sales of $3,317.5 million were up 43% on a year-over-year basis. Management highlighted that in the year-ago quarter, the company’s performance was adversely impacted by store closures due to the pandemic. The top line increased 14.3% from second-quarter fiscal 2019 levels.

Gross profit amounted to $1,498 million during the quarter, up from $711.5 million in the year-ago period. Gross margin came in at 45.2%, up 1,110 basis points (bps) year on year. Gross margin improved 1,130 bps from second-quarter fiscal 2019 levels, driven by growth in the merchandise margin rate as well as buying and occupancy expense leverage.

Operating income amounted to $599.1 million, rising from $44 million in the year-ago quarter.

Bath & Body Works’ total sales increased 36% year over year to $1,703.7 million. Compared with year-ago levels, the company saw strong growth in home fragrance, fragrant body care, and gifting. However, soaps and sanitizers witnessed a declined from last year’s levels. Compared with second-quarter fiscal 2019, Bath & Body Works’ sales increased 53.9%, backed by growth in transactions and average dollar sale for both stores and direct. The company witnessed balanced growth of nearly 35% across all merchandising categories compared with levels in the same period in fiscal 2019.

Sales in Bath & Body Works U.S. and Canada stores amounted to $1,229 billion, up 39% from second-quarter fiscal 2019 levels. Direct sales during the second quarter increased 128% from the figure in the same period in fiscal 2019.

Speaking specifically for Bath & Body Works, the company completed 45 real estate projects in North America during the second quarter, including 20 off-mall stores and 25 remodels. Year to date, the company has closed 11 stores. It expects to close about 20-40 stores during fiscal 2021, mainly in malls. It also anticipates opening 55 new off-mall store locations in North America. As a result, by the end of the year, the company anticipates 47% of its stores to be in off-mall locations and 58% will be in White Barn store design.

In respect of Bath & Body Works international, the company currently operates 305 stores and 24 online sites across 35 countries. During the second quarter, the company opened eight new international stores and one new online site, while it closed two stores. For the rest of fiscal 2021, it expects to open another 35-40 new stores, leading to an annual increase of about 20%. 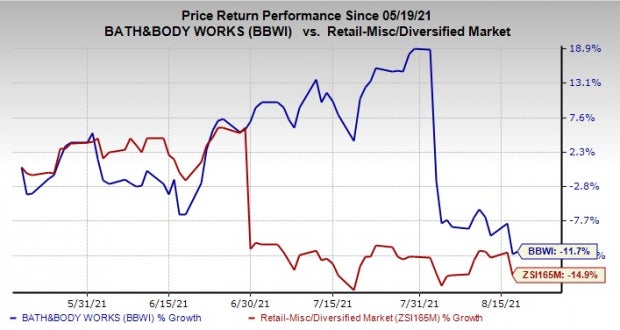 Bath & Body Works, as a standalone company, expects third-quarter fiscal 2021 earnings in the range of 55-60 cents per share. This excludes one-time costs related to the spin-off of Victoria’s Secret. Earnings per share from continuing operations amounted to 83 cents in 2020 and 20 cents in 2019. The Zacks Consensus Estimate for third-quarter fiscal 2021 earnings is currently pegged at 55 cents per share.

This Zacks Rank #5 (Strong Sell) company’s shares have declined 11.7% in the past three months compared with the industry’s fall of 14.9%

The Childrens Place, Inc. (PLCE - Free Report) , sporting a Zacks Rank #1, has a long-term earnings growth rate of 8%. You can see the complete list of today’s Zacks #1 Rank stocks here.