Kimberly-Clark Corporation (KMB - Free Report) appears to be in troubled waters. The company has been encountering high input costs and escalated other manufacturing expenses for a while – with the trend lingering in second-quarter 2021. During the quarter, the company’s organic sales were dented by a reversal of consumer tissue volumes.

During the second quarter, both top and bottom lines missed the respective Zacks Consensus Estimate and the latter decreased year over year. Management lowered its 2021 outlook due to a tough near-term environment, including input cost inflation as well as the pandemic-related demand volatility. The Zacks Consensus Estimate for 2021 has moved 9.1% south over the past 30 days to $6.73 per share. The Zacks Rank #5 (Strong Sell) stock has declined 10.4% over the past year compared with the industry’s drop of 3.6%.

Kimberly-Clark’s second-quarter 2021 performance reflects continued volatility induced by the coronavirus pandemic. The company is encountering considerably escalated input costs, along with a reversal of consumer tissue volumes, which dented its organic sales in North America. Also, the company’s supply chain has been disturbed. Adjusted earnings of $1.47 per share fell short of the Zacks Consensus Estimate of $1.7, and declined considerably from $2.20 per share in the year-ago quarter. Organic sales fell 3%, with volumes down 4%.

Net sales in 2021 are now likely to grow 1-4% year over year. Business exits related to the 2018 Global Restructuring Program are expected to slightly weigh on sales, though currency movements and Softex Indonesia’s buyout are likely to have positive impacts. Earlier, management had anticipated net sales to increase 3-5%. Organic sales growth is now expected to be flat to 2% down compared with flat to 1% up forecasted before. Moving on, Kimberly-Clark now expects a greater increase in input costs compared with what was anticipated earlier. The company now envisions 2021 adjusted earnings per share of $6.65-$6.90, down from the previous expectation of $7.30-$7.55. The metric came in at $7.74 in 2020. 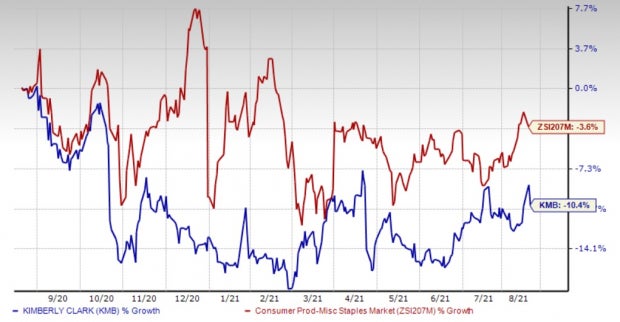 In the second quarter, adjusted operating profit of $676 million fell from the year-ago period’s $1,012 million. This was accountable to a rise in input costs (to the tune of $345 million) as well as reduced sales volumes. Increased pulp, other materials and distribution costs led to a rise in input costs. Also, a rise in other manufacturing costs like inefficiencies from lower production volumes caused the downside. Key input costs for 2021 are now estimated to escalate $1,200-$1,300 million compared with the $900-$1,050 million projected before. The updated input cost guidance is accountable to higher polymer-based materials and pulp costs. Management now expects adjusted operating profit to decrease 11-14% compared with the 3-6% decline anticipated earlier.

Moving on, the company’s organic sales in the second quarter declined year over year, largely affected by soft consumer tissue volumes in North America. Consumer tissue volumes are declining from the record jump in the year-ago period, with retailers and consumers in North America curtailing inventory and at-home stocking. During the second quarter, Consumer Tissue segment sales of $1,424 million fell 13% year over year, including a nearly 3% positive impact from currency rates. Volumes fell 15% due to lower shipments in North America, which, in turn, stemmed from category softness with retailers curtailing inventory and consumers cutting down at-home consumption and pantry loading. Sales fell 26% in North America, though the metric grew in other markets.

While continuation of the abovementioned trends is a concern, Kimberly-Clark has been focused on its robust saving and pricing efforts.  This is highlighted by the company’s 2018 Global Restructuring Program, as well as the Focus on Reducing Costs Everywhere or FORCE Program.  Management expects total cost savings of $520-$560 million in 2021, including $400-$420 million from the FORCE program and $120-$140 million from the 2018 Global Restructuring Program. That said, it is yet to be seen if the aforementioned roadblocks can be completely offset by such upsides.

WD-40 Company (WDFC - Free Report) sports a Zacks Rank #1 (Strong Buy), at present, and its bottom line outpaced the Zacks Consensus Estimate by 29.7% in the trailing four quarters, on average. You can see the complete list of today’s Zacks #1 Rank stocks here.