Moderna’s (MRNA - Free Report) mRNA-based COVID-19 vaccine, mRNA-1273 is being investigated by the FDA and the U.S. Centers for Disease Control and Prevention (CDC) for higher risk of myocarditis, a rare condition of heart inflammation, in younger adults per a Washington Post article. The article implies that the risk of myocarditis following inoculation with mRNA-1273 can be more than previously thought and is also higher than Pfizer (PFE - Free Report) /BioNTech’s (BNTX - Free Report) mRNA-based vaccine, BNT162b.

Per the same Washington Post article, the claims of higher risk of myocarditis, especially for males below the age of 30 or so, following Moderna’s jab are majorly based on data from Canada. The same data suggests that vaccination with mRNA-1273 may increase the risk of incidence of myocarditis by 2.5-fold compared to BNT162b. U.S. health officials are currently reviewing the data as well as data generated in the United States for a possible link to higher risk of heart inflammation. The report stated that the officials believe it is too early to conclude and issue any kind of new or revised warning or recommendation for mRNA-1273.

Meanwhile, U.S. health officials have decided to start providing booster doses to the country’s citizens beginning in the first week of fall that will start on Sep 20. Amid rising support for booster doses for better protection against the Delta variant, the potential link to higher risk of heart inflammation may hurt demand for Moderna’s mRNA-1273, pushing it further back in the competition. Moreover, a few new COVID-19 vaccines may enter the U.S. markets this year, which will result in increased competition.

Shares of Moderna fell 5.8% on Aug 19, following the reports on probe for higher risk of heart inflammation. The company’s shares have surged 259.4% so far this year against the industry’s decrease of 0.3%. 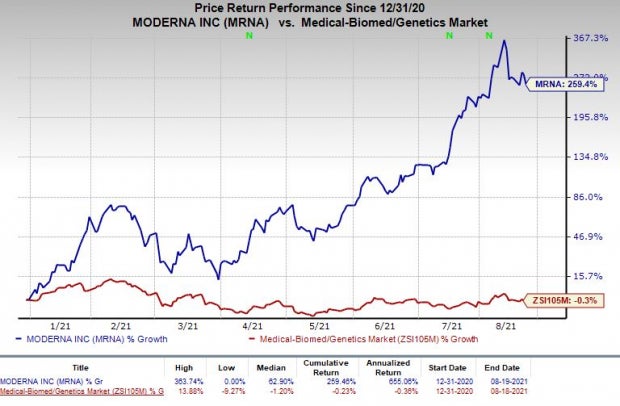 We note that the CDC concluded earlier in June that there is a “likely association” between mRNA-based COVID-19 vaccines and increased cases of heart inflammation, including myocarditis and pericarditis, in adolescents and younger adults. Heart inflammation was reported after the first dose of mRNA-1273 and BNT162b in a small proportion of individuals,which increased further following the second dose. However, similar inflammation cases were not reported following vaccination with J&J’s (JNJ - Free Report) adenovirus-based COVID-19 vaccine. Following the investigation, the labels of both mRNA-based vaccines were updated to include a warning label for increased risk of myocarditis.

Meanwhile, the United States is not the only country to probe various risks with possible links to mRNA-based COVID-19 vaccines. Earlier this month, the European Medicines Agency initiated an investigation to study three new conditions found in a small proportion of individuals receiving mRNA-based vaccination.The individuals immunized with a mRNA-based vaccine reported that they developed either erythema multiforme (allergic skin reaction), glomerulonephritis (kidney inflammation) and/or nephrotic syndrome (renal disorder).