In recent years, the company emerged as one of the largest acreage holders in Brazil. It acquired more than 20 blocks and identifies the country as one of its key areas for expansion. Due to improved quality and advanced production technology, crude oil from the offshore fields generates less emission per barrel.

Exxon is planning to achieve carbon neutrality in operations by 2050, due to mounting pressure from investors to combat climate change. Since June, the company has been actively engaged in reassessing its business strategies, including its approach to the energy transition.

In July, Exxon joined some of the leading energy companies in setting goals to lower emissions as a proportion of output. However, the company’s plan, which covers emissions from direct operations and from the power used in its operations, lagged behind big oil rivals. This is because European majors like BP plc (BP - Free Report)  and Royal Dutch Shell Plc (RDS.A - Free Report)  also pledged to reduce emissions from products sold to customers.

Brazil is organizing two oil licensing rounds this year, with the first in October under a concession model. In December, the country will offer two oil blocks, namely Sepia and Atapu, under a transfer-of-rights rules. The blocks on offer were initially made available in 2019 in an oil auction, which became ineffective as companies, including Exxon, made no bids.

Headquartered in Irving, TX, Exxon is one of the leading integrated energy companies in the world.

Shares of the company have underperformed the industry in the past three months. The stock has declined 10.5% compared with the industry’s 4.4% fall. 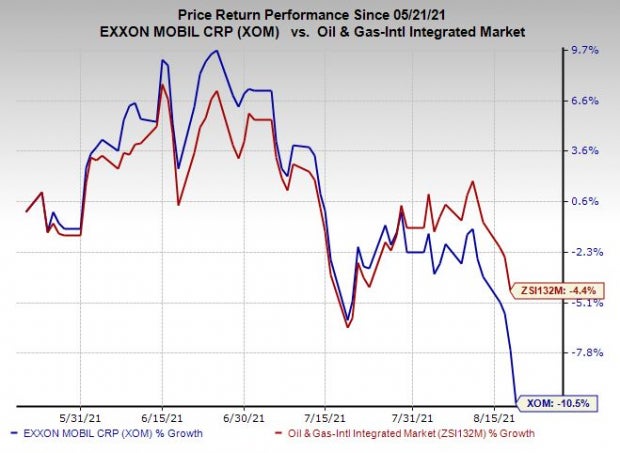 Cheniere’s earnings for 2021 are expected to increase 31.6% year over year.