Masimo Corporation (MASI - Free Report) recently announced the findings of a study published in the Turkish Journal of Emergency Medicine, wherein researchers explored the utility of noninvasive, continuous Masimo Pleth Variability Index (PVi) when it comes to monitoring volume status and changes in spontaneously breathing patients who are undergoing hemodialysis (HD). Per the findings, a strong correlation has been found between change in PVi and the volume of fluid removed.

Based on the positive outcome, PVi might offer clinicians useful information for monitoring the volume status in critically ill patients with spontaneous breathing.

It is worth mentioning that in the United States, PVi has clearance to be utilized as noninvasive, dynamic indicator of fluid responsiveness in select populations of mechanically ventilated adult patients.

More on the Study

There have been more than 100 independent studies demonstrating the utility of PVi as an indicator of fluid responsiveness. For this particular study, researchers enrolled 60 adult patients with end-stage renal disease receiving routine HD — wherein fluid is removed simultaneously with the removal of waste solutes — and had a median of 3,500 cc of fluid removed during HD. 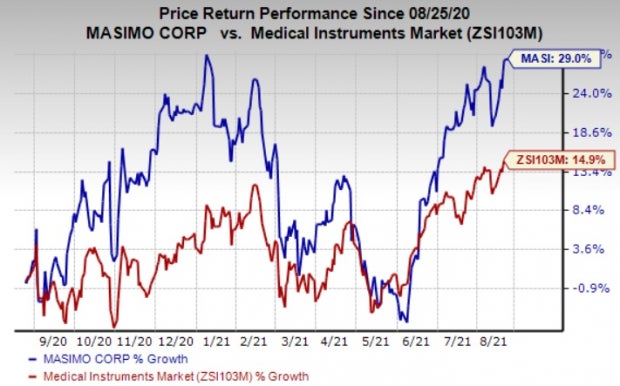 PVi was measured utilizing a Masimo pulse oximetry sensor attached to a Masimo Root monitor, before and after HD, while changes in PVi were compared to the amount of fluid removed during the session.

It is important to mention here that the reliability of PVi in estimating fluid responsiveness is variable and can be influenced by several patient, procedure and device-associated factors.

Per a report by Market Data Forecast, the global fluid management systems market is projected to be worth $14.74 billion by 2026 from $11.12 billion in 2021, at a CAGR of 5.8% during the forecast period. Given the market potential, the positive study outcome is likely to provide a significant boost to Masimo’s patient monitoring business profile.

This month, the company announced the findings of a study published in the Journal of Pain & Relief wherein researchers explored the utility of Masimo Bridge in reducing postoperative opioid needs in patients undergoing kidney donor surgery. Bridge, an auricular field nerve stimulator, was found to be associated with significant reductions in opioid use and pain after surgery.

In July, the company announced robust second-quarter 2021 results where it recorded a strong rebound in sensor sales (on the back of steady expansion of monitoring in hospitals), along with robust order shipments.

The same month, Masimo announced the release of its latest and most advanced rainbow SET board, MX-7. The board has been engineered for integration into numerous multi-parameter monitors available with the company’s various original equipment manufacturing partners.

Shares of the Zacks Rank #3 (Hold) company have gained 29% in the past year compared with the industry’s growth of 14.9%.

Here's Why You Should Hold on to NextGen (NXGN) Stock Now