Tesla’s (TSLA - Free Report) highly anticipated Artificial Intelligence (AI) day was the highlight of the last week. The event was live-streamed on the company’s official YouTube channel on Aug 19. At the flashy event, the electric car maker made several key announcements in areas of computing, AI and robotics. The most exciting part of the event was Musk unveiling Tesla's latest project, the Tesla Bot, a 5’8″, 125-pound humanoid robot aimed at performing all the tasks that humans can do. The Tesla Bot will leverage the advanced technology used in the company’s autopilot driver assistance program. It is still under development and a prototype of the same is expected by next year.

Tesla also rolled out an in-house computer chip named D1, which the company is using to power its upcoming supercomputer, Dojo. Tesla pointed out that the Dojo supercomputer will not just be a technology limited to its ambitious Full Self-Driving system but also will likely be made available to other automakers and tech companies at large. Musk further stated that Dojo is anticipated to be operational next year. Tesla also shed light on its computer vision system to autonomy, an approach that uses neural networks to ideally allow the car to function anywhere on earth via its Autopilot system.

Apart from this mega event, here is a rundown of other stories from the last week that made headlines.

1. Ford’s (F - Free Report) micromobility subsidiary — Spin — announced an integration with Alphabet-owned Google Maps. This integration will not only help Google Maps users locate, on a real-time basis, the closest available Spin vehicle but the app will also provide additional details like how long it will take to walk to the vehicle, and the estimated battery range and arrival time. The collaboration with Google marks Spin’s biggest platform integration till date, with many more in the pipeline. In fact, Spin is already integrated on other global and regional journey planning platforms like Citymapper and Moovit.

2. Group 1 Automotive (GPI - Free Report) announced a hike in second-quarter 2021 dividend. The company announced a quarterly cash dividend of 34 cents per share, representing a 3% increase from the first-quarter payout. This amount will be paid on Sep 15 to shareholders on record as of Sep 1, 2021. Group 1’s robust business model highlights its commitment toward enhancing shareholders’ value with strong cash-generation capabilities. It must be noted that the auto retailer has been increasing dividend every quarter after it resumed dividend payments last November on the back of a gradual recovery of the business from the repercussions of the pandemic.

3. Goodyear Tire (GT - Free Report) announced that its venture capital arm — Goodyear Ventures — has invested in AmpUp, a leader in electric vehicle (EV) charging. The investment in AmpUp will give Goodyear Ventures access to the latest electrification trends and bring their charging solutions to fleet customers who want to transit to EVs. AmpUp plans to use the capital to expand operational and technical capabilities in a bid to cater to the rising demand for charging stations. The latest investment will help AmpUp achieve the goal of increasing charge station access across North America.

4. Winnebago Industries (WGO - Free Report) announced a quarterly cash dividend of 18 cents per share, higher than the previous payout of 12 cents. The 50% dividend hike is reflective of the company’s strong financial position and robust portfolio of premium outdoor lifestyle brands. The dividend will be paid out on Sep 29 to common stockholders of record as of Sep 15. With this announcement, Winnebago has paid a quarterly cash dividend to common stockholders of record for the last 29 quarters. The firm also announced the shift of its corporate headquarters from Iowa to Minnesota, effective Dec 1, 2021. 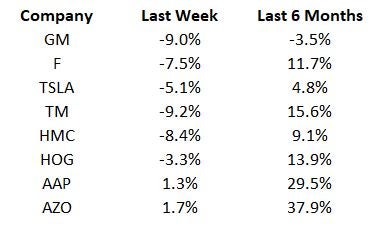 In the last six months, all stocks have increased, apart from General Motors. In the past week, all stocks apart from Advance Auto Parts and AutoZone have declined.

Industry watchers will track the passenger car registrations data in European Union for July 2021, which is likely to be released by European Automobile Manufacturers Association soon. Investors are also awaiting the quarterly reports of XPeng (XPEV - Free Report) and Li Auto (LI - Free Report) that are set to be announced on Aug 26 and Aug 30, respectively. Also, stay tuned for coronavirus and chip crunch-related disruptions in the auto sector.