U.S. telecom stocks have witnessed a relatively flat curve over the past week despite the multi-billion infrastructure bill making a significant headway in the House of Representatives. The bill is on track for the final passage by the House by Sep 27 and then will be forwarded to the President’s desk for his signature to be deemed as a law. The infusion of federal funds to improve broadband infrastructure for greater access and deeper penetration in the underserved markets is likely to bridge the digital divide with more focus on affordability and low-cost service option. Although this infused optimism within the sector, increasing concerns regarding coronavirus resurgence with the spread of the Delta variant and speculations of protracted economic recovery owing to mounting inflationary pressures probably restricted the uptrend.

The House of Representatives passed the $3.5 trillion budget resolution and $1.2 trillion infrastructure bill with lawmakers voting along the party lines for a final count of 220-212 votes in favor of the resolution. The bill aims to pave the way for broad-based infrastructure investments to pep up the economy. The Biden administration is also working hard to address the supply chain disruptions in the chip market that have led to acute global chip shortage. In a global discussion in Singapore that was attended by top-level foreign diplomats and representatives of leading chip manufacturers, Vice President Kamala Harris urged greater international cooperation to bolster supply chains. The participants agreed to pool in their resources for greater collaborative effort to address the demand-supply imbalance. In a separate statement, the Taiwan government also tried to assure the White House that it is stepping up domestic chip production to the best of its capabilities in order to resolve the issue at the earliest.

Meanwhile, various media reports suggest that despite tense Sino-U.S. undercurrents, the Biden administration has approved certain domestic firms to supply microchips to China-based telecommunications equipment manufacturer Huawei. The components are likely to be used in video screens and sensors, primarily for the consumption of the automotive industry. Strict U.S. restrictions have dried up the supply of basic components for smartphone manufacturing for Huawei, largely forcing it to diversify into other businesses for survival. The semiconductor chips used in the automotive industry are comparatively less advanced than that used in the telecom sector, making them more accessible to the company and gain an opportunity to secure license approvals to buy the same from U.S.-based suppliers. Although the purported move attracted criticism from some Republicans, the government reiterated that no compromise was made on any grounds that jeopardized national security interests.

Regarding company-specific news, 5G expansion, collaboration, and strategic tie-up primarily took the center stage over the past five trading days.

1.     AT&T Inc. (T - Free Report) and General Motors Company have taken automotive connectivity to the next level by aiming to bring 5G network in the latter’s vehicles that will be manufactured over the next decade in the United States. The partnership aims to sow the seeds of a fifth generation cellular network architecture in the upcoming models of General Motors, while facilitating existing 4G LTE-capable models to seamlessly migrate to the upgraded technology.

The 5G standards are likely to set a new benchmark for automotive connectivity and will power a fleet of connected vehicles. The 5G core network in vehicles will help to improve roadway-centric coverage with faster music and video downloads, secure over-the-air software updates and faster navigation, mapping and voice services. With 5G network connectivity, more data is likely to be available to users on the go, which in turn will provide a strong foundation for General Motors’ pivotal growth strategy that hinges on advanced technology such as Super Cruise (that provide the ease and convenience of hands-free driving) and Vehicle Intelligence Platform (a connected electric vehicle architecture that enables over-the-air-updates).

2.     Nokia Corporation (NOK - Free Report) recently inked a deal with A1 Telekom Austria Group to expand the carrier’s 5G services across Bulgaria, Serbia and Slovenia while strengthening its presence in the domestic market. The multi-country deal with a single vendor like Nokia will enable A1 Telekom, the European unit of América Móvil, S.A.B. de C.V. (AMX - Free Report) , to offer commercial 5G services across the region and work collaboratively to deploy premium digital services in the near future.

Per the deal, the telecommunications equipment manufacturer will provide 5G RAN solutions from its leading AirScale portfolio in all the three markets and 5G standalone network in Serbia and Slovenia. While the project is already under way in Bulgaria, construction work in the other two markets is expected to start soon.

3.     Ericsson (ERIC - Free Report) has been selected by Faroese Telecom, a leading communications service provider in the Faroe Islands, in an exclusive 5G Core and Radio Access Network deal. The financial terms of the deal were not disclosed.

The latest deal marks a significant step toward unlocking the potential of 5G services and new use cases across the Faroe Islands. The operator will use Ericsson’s industry-leading technology to modernize its existing network. The deployment is expected to be completed in 2023.

Per the agreement, Telefonica Global Solutions will be a wholesale distributor of Viasat’s high-speed satellite Internet services in Brazil, serving businesses across the country. Enterprises that are located in hard-to-reach regions of Brazil, where terrestrial Internet service is unavailable, are unable to capitalize on advanced digital services. This partnership is aimed at providing the businesses with an opportunity to join the digital community and boost operations.

5.    Juniper Networks, Inc. (JNPR - Free Report) recently inked a contract for an undisclosed amount with SINET in order to deploy advanced networking solutions across Cambodia. The deal for the upgrade of infrastructure facilities with one of the largest wireless service providers in the South East Asian country is expected to reduce the complexity of the network, while increasing its operational flexibility and efficiency.

Juniper has long been associated with SINET and the current contract extends this business relationship to capitalize on the exponential rise of mobile and broadband connectivity in the country. With the growing usage of smartphones and tablets, mobile data traffic has gone up. This has resulted in higher demand for advanced networking architecture, which is leading service providers like SINET to spend more on routers and switches. The network infrastructure upgrade will enable the carrier to effectively handle this data surge by utilizing a common framework. 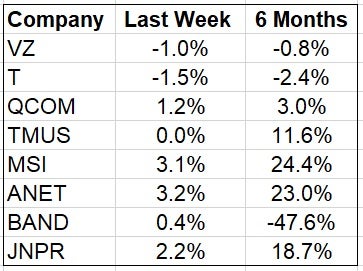 In the past five trading days, Arista has been the best performer with the stock gaining 3.2%, while AT&T declined the most with its stock falling 1.5%.

Over the past six months, Motorola has been the best performer with its stock appreciating 24.4%, while Bandwidth declined the most with its stock falling 47.6%.

Over the past six months, the Zacks Telecommunications Services industry has gained 13.8% and the S&P 500 has rallied 15.5%. 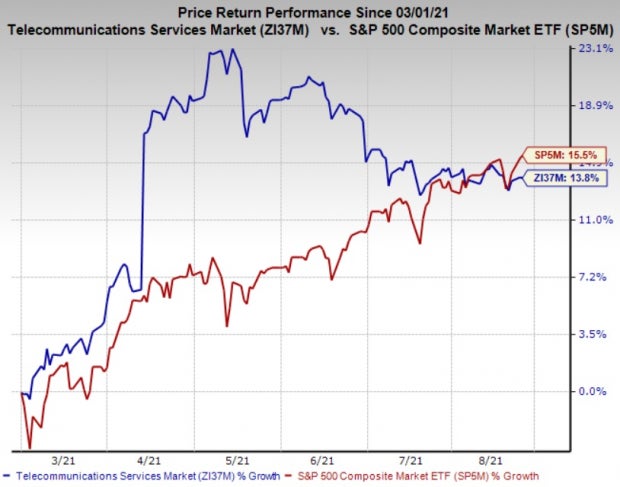 4 Solid Stocks to Buy on a Robust PC, Tablet Market