BP plc (BP - Free Report) received approval to spin off its Iraq operations into an independent entity by the country’s Council of Ministers, per a report by Reuters.

The company aims to limit its exposure to assets prone to be at risk from the low-carbon transition as it plans to divert its focus to clean energy.

The new entity, which will be known as Basra Energy Company Ltd, would hold BP’s interest in the super-giant Rumaila oilfield.  Basra Energy will be owned by BP and China National Petroleum Corporation (“CNPC”), one of the company’s partners at the site.

The Rumaila oilfield is the third biggest producing field in the world, which provides one-third of the country’s total oil supply. The field began production in 2010 and has a capacity of 2.1 million barrels per day.

The oilfield has been a backbone in BP’s portfolio of assets. BP, which is a lead contractor for the field, has a 47.6% ownership interest, while CNPC and the State Organization for Marketing of Oil hold 46.4% and 6% interest in the field, respectively.

Iraq approved the establishment of Basra Energy to be the financing entity for the development of the Rumaila oilfield. It will become a key element for the energy transition and the country’s economic growth.

The joint venture would allow BP and PetroChina to continue investing in the oilfield throughout their existing contract period, which expires in 2034. It will also enable the parties to access external financing.

BP considers spinning off as a strategy to allocate additional capital toward renewable business, while squeezing more from its oil and gas assets.The spin-off is likely to provide BP with more flexibility to invest in low-carbon energy and reduce its spending on oil and gas. The spun entity would take on its debt, separate from BP, and is expected to distribute its earnings through dividends.

Shares of the company have outperformed the industry in the past month. Its stock has gained 1.5% against the industry’s 0.9% fall. 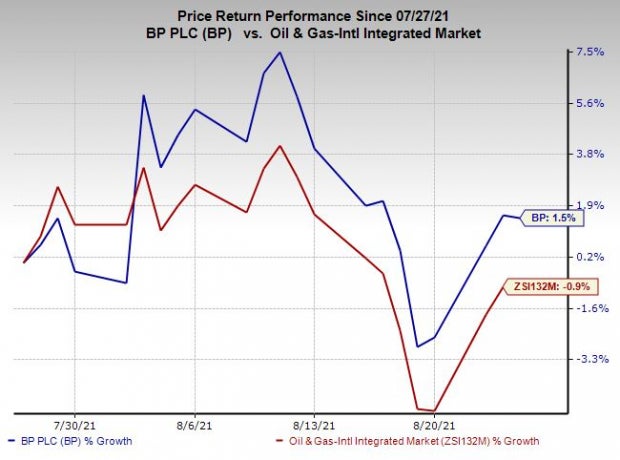 Ecopetrol’s earnings for 2021 are expected to increase 10.5% year over year.

Range Resources’ earnings for 2021 are expected to increase 26.1% year over year.