The third-quarter results were driven by a considerable rise in demand, as well as prices for products sold to foodservice customers and sustained demand strength for products sold to retail grocery store customers. With more foodservice set-ups reopening across the country, market conditions for products sold to this channel have improved. A number of consumers have started dining away from home, with curbs being lifted and vaccinations gathering pace. That said, retail demand remained elevated with many consumers continuing to cook meals at home. Demand and pricing sold, mainly for export, was higher than the pandemic-led level witnessed in the second half of fiscal 2020.

These upsides were somewhat negated by soft volumes related to the company’s planned egg set reductions implemented in the early pandemic stages, as well as escalated feed grain costs.

The company delivered earnings of $7.38 per share compared with the year-ago quarter’s figure of $1.48. Earnings also beat the Zacks Consensus Estimate of $6.73 per share.

The company’s average feed cost per pound of poultry products processed climbed 45.8%. Prices paid for corn and soybean meal were higher by 87.7% and 50.1%, respectively. Soybean meal and corn are part of the company’s primary feed ingredients.

Management, at its third-quarter earnings call, stated that supply for corn and soybeans remains tight compared with the expected demand. The company anticipates market prices for corn and soybeans to be escalated for the near term, at least. This, along with expected basis costs, are likely to result in an 8.44 cents per pound hike in feed cost per pound of poultry processed, in fiscal 2021. 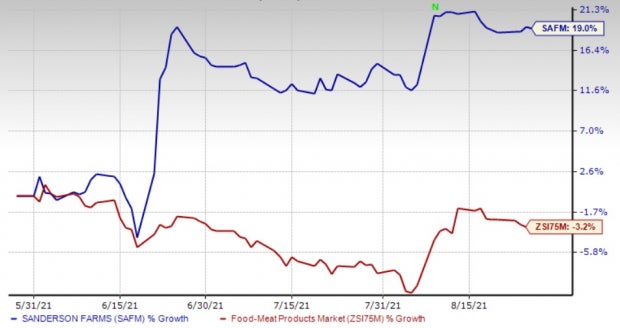 The company had $975.9 million remaining under its existing revolving credit facility, as of Aug 25, 2021. Management believes that Sanderson Farms has sufficient funds to cater to its needs.

On its third-quarter earnings call, management said that with regard to chicken production, the USDA’s latest estimates project U.S. broiler production to advance by less than 1% in calendar-year 2021 compared with the year-ago period. Although egg sets have reverted to the pre-COVID-19 levels, reduced hatchability rates have led to lower number of chicks placed. Management anticipates total production to drop 3.1%, year over year, in the fourth quarter of fiscal 2021. Considering this, overall fiscal 2021 production is likely to slip 0.6% from fiscal 2020.

Shares of this Zacks Rank #3 (Hold) company have increased 19% in the past three months against the industry’s decline of 3.2%.

Pilgrim’s Pride (PPC - Free Report) sports a Zacks Rank #1 (Strong Buy), at present. It has a long-term earnings per share growth rate of 31%. You can see the complete list of today’s Zacks #1 Rank stocks here.