Shares of Ascendis Pharma A/S (ASND - Free Report) rose more than 21% on Aug 26 following approval of its biologics license application (BLA) for Skytrofa (TransConhGH; lonapegsomatropin-tcgd) by the FDA. The BLA sought approval for the long-acting growth hormone treatment drug as a treatment for growth failure due to inadequate secretion of endogenous growth hormone (GH) in pediatric patients 1 year or older and who weigh at least 11.5 kg (25.4 lb).

The drug is the first approved product in the company’s portfolio. It is also the first FDA-approved product that delivers growth hormone (somatropin) by sustained release over 1 week. The drug has the potential to replace current standard-of-care of daily somatropin therapies due to its once-weekly administration.

The drug will be available in the United States shortly along with a full suite of patient support programs, including proper injection procedures. Along with the drug, the FDA also approved new Skytrofa Auto-Injector and cartridges which will allow patients to store the medicine at room temperature for up to six months following first removal from a refrigerator. Moreover, the once-weekly administration of Skytrofa will reduce injections per year by up to 86% for patients currently receiving daily injections.

A regulatory application seeking approval for lonapegsomatropin for pediatric growth hormone deficiency (GHD) is under review in Europe. A decision is expected in the fourth quarter of 2021.

Shares of Ascendis have declined 10.2% so far this year against the industry’s increase of 1.3%. 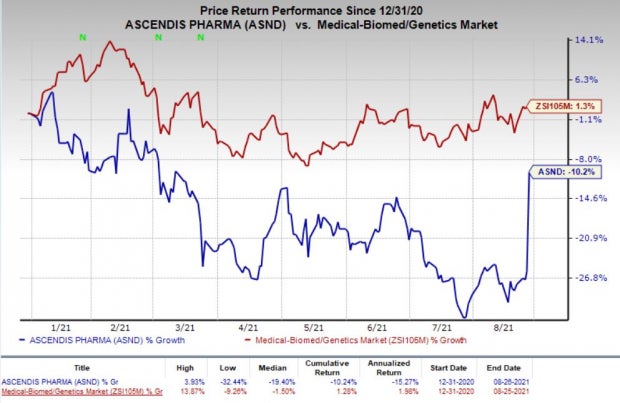 Meanwhile, lonapegsomatropin enjoys Orphan Drug designation for GHD in both the United States and Europe. However, some large as well as small biotechs are also engaged in developing treatment for GHD including Novo Nordisk (NVO - Free Report) and I-Mab Biopharma (IMAB - Free Report) .

Apart from lonapegsomatropin, the company is also evaluating multiple other pipeline candidates developed using TransCon. Key among them include TransCon CNP and TransCon PTH. A phase II study is evaluating TransCon CNP for the treatment of achondroplasia, the most common form of dwarfism. TransCon PTH is being evaluated in a phase III study as a potential treatment for hypoparathyroidism in adult patients. Top-line data from the late-stage study is expected in the fourth quarter of 2021.