The past week has been low-key for the biotech sector with a few important pipeline and regulatory updates. Drug approvals were also in focus.

Regeneron Announces Positive Data on Dupixent:  Regeneron Pharmaceuticals, Inc. (REGN - Free Report) and partner Sanofi (SNY - Free Report) announced positive results from a study evaluating dermatitis drug Dupixent (dupilumab) for the treatment of moderate-to-severe atopic dermatitis or eczema in children aged six months to five years. Patients received Dupixent every four weeks (200 mg or 300 mg, based on body weight) plus topical corticosteroids (TCS) or placebo. The study trial met its primary and all secondary endpoints as results showed that Dupixent when added to standard-of-care TCS significantly reduced overall disease severity and improved skin clearance, itch and health-related quality of life measures at 16 weeks compared to TCS alone (placebo). Dupixent rapidly improved symptoms after the first dose, improving itch in one week and clearing skin in two weeks. Dupixent plus TCS reduced overall disease severity by 70% and itch by 49%. Dupixent is currently approved in the United States and Europe other countries around the world for the treatment of specific patients with moderate-to-severe atopic dermatitis, as well as certain patients with asthma in different age populations.

Incyte Gets Approval for Lymphoma Drug: Incyte (INCY - Free Report) and partner MorphoSys AG (MOR - Free Report) obtained approval from the European Commission for tafasitamab under the brand name Minjuvi. The drug has been approved in combination with Revlimid (lenalidomide) followed by Minjuvi monotherapy for the treatment of adult patients with relapsed or refractory diffuse large B-cell lymphoma ("DLBCL") who are not eligible for autologous stem cell transplant ("ASCT"). Approval was in the cards as the European Medicines Agency’s Committee for Medicinal Products for Human Use recommended the conditional marketing authorization of Minjuvi in June 2021. The conditional approval is based on positive results from the L-MIND study evaluating the safety and efficacy of Minjuvi in combination with Revlimid as a treatment for patients with relapsed or refractory DLBCL who are not eligible for ASCT. While Incyte has exclusive commercialization rights to tafasitamab outside the United States, both the companies co-market the drug under the brand name Monjuvi in the United States.

Cassava Slides on Quanterix’s Statement: Shares of Cassava Sciences, Inc. (SAVA - Free Report) plunged after Quanterix Corporation, a company digitizing biomarker analysis, stated that neither it nor its employees interpreted the test results or prepared the data charts presented by Cassava at the Alzheimer’s Association International Conference in July 2021 or otherwise. The company is developing simufilam for the treatment of Alzheimer’s disease (AD). The test results in question are plasma p-tau analysis from a previously disclosed randomized, controlled phase IIb study in patients with AD. The phase IIb study was conducted by Cassava. In response, Cassava stated that Quanterix’s sole responsibility with regard to this clinical study was to perform sample testing, specifically to measure levels of p-tau in plasma samples collected from study subjects. Per the company, it is the norm of the industry to separate the people who generate the data from the people who analyze the data. It further added that Quanterix’s employees did not know whether the samples were from placebo, or simufilam-treated patients. It conducted sample testing and then sent raw data to Cassava for analysis of treatment effects.

AC Immune Surges on Study Results:  Shares of clinical-stage biopharmaceutical company, AC Immune SA (ACIU - Free Report) surged after it announced that partner Roche informed it that a mid-stage study evaluating the safety and efficacy of the investigational anti-tau monoclonal antibody, semorinemab, in mild-to-moderate AD, met one of its co-primary endpoints.  Top-line data from the placebo-controlled phase II study, Lauriet, showed that semorinemab demonstrated a statistically significant reduction in cognitive decline from baseline by 43.6% compared to placebos measured by the Alzheimer’s Disease Assessment Scale, Cognitive Subscale, 11-item Version (ADAS-Cog11) at week 49 in patients with mild-to-moderate AD. However, the second co-primary endpoint, Alzheimer’s Disease Cooperative Study-Activities of Daily Living (ADCS-ADL), was not met. Per Roche, the open-label portion of the study will continue as planned. 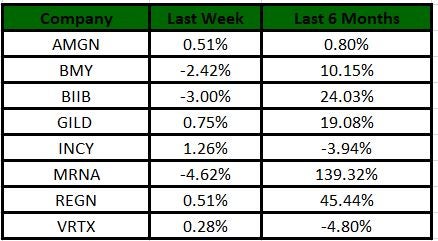 The Nasdaq Biotechnology Index has gained 0.54% in the past five trading sessions. Among the biotech giants, Incyte has gained 1.26% during the period. Over the past six months, shares of Moderna have soared 139.32%. (See the last biotech stock roundup here: Biotech Stock Roundup: REGN, MRNA Offer COVID-19 Updates, TBPH Down on Study Update).