TELUS Corporation (TU - Free Report) has inked a multi-year deal with General Motors Canada to power the latter’s autonomous vehicles with 5G network. GM Canada is the subsidiary of the automotive giant — General Motors Company (GM - Free Report) . The collaboration aims to sow the seeds of a fifth-generation cellular network architecture in the upcoming models of General Motors with high-performance wireless network capabilities.

The move will facilitate existing 4G LTE (Long Term Evolution)-equipped models to seamlessly migrate to the upgraded technology of TELUS 5G network. The shift will help General Motors to launch a range of best-in-class driver-assistance technologies and entertainment features, thereby strengthening its commitment toward zero congestion and zero crashes.

General Motors has been enjoying a significant presence in Canada since the launch of OnStar, a General Motors unit, in 1999. OnStar provides subscription-based communications, in-vehicle security and remote diagnostics systems, to name a few. The deal is likely to further reinforce the nearly two-decade-long relationship of both the companies while benefiting the people of Canada with superior connected car technology and connectivity.

The 5G standards are expected to set a new benchmark for automotive connectivity and will power a fleet of connected vehicles. The 5G core network in vehicles will help to bring about performance enhancements with faster music and video downloads in high-quality, secure over-the-air software updates and faster navigation, mapping and voice services with enhanced roadway-centric coverage. With 5G network connectivity, more data will be available to users on the go.

Interestingly, this is the first time that the auto behemoth has tapped a domestic communications company for connected-vehicle services. The initial batch of GM’s autonomous vehicles incorporated with TELUS’ 4G-LTE and 5G network is slated for launch with the 2025 model year. With 4G LTE-enabled cars getting equipped with the new TELUS network, GM brands such as Buick, Cadillac, GMC and Chevrolet will also benefit from the transition.

Once the technology is fully available, General Motors will offer 5G network access to its partners for interoperability and future mobility services such as vehicle-to-electric grid, e-commerce and smart city. Apart from TELUS, GM had inked an agreement with AT&T Inc. (T - Free Report) in August 2021 for 5G services. As telcos compete for connected car deals, the recent move will foster TELUS’ 5G network and boost General Motors’ leadership position in connected-vehicle services in Canada with exceptional customer experience.

TELUS currently has a Zacks Rank #4 (Sell). Its shares have gained 25.9% compared with industry’s growth of 13.2% in the past year. 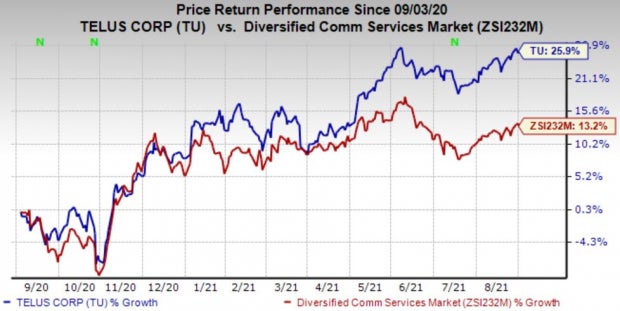 A better-ranked stock in the broader industry is Otter Tail Corporation (OTTR - Free Report) which sports a Zacks Rank #1 (Strong Buy). You can see the complete list of today’s Zacks #1 Rank stocks here.

Otter Tail pulled off a trailing four-quarter earnings surprise of 31.8%, on average.