Element Solutions Inc. (ESI - Free Report) recently announced that it has closed the acquisition of Coventya Holding SAS, a global provider of specialty chemicals for the surface finishing industry. The acquisition was announced in June this year. Coventya will join MacDermid Enthone Industrial Solutions and will be reported within Element’s Industrial & Specialty segment.

The company expects Coventya to generate annual sales to the tune of roughly $190 million and adjusted EBITDA of more than $35 million for fiscal 2021 (ending in September). This also includes annualized synergies of at least $15 million expected to be achieved within two years. The purchase price represents less than 10x its projected adjusted EBITDA for fiscal 2021. The total sum of roughly $500 million was funded partly with $400 million of additional Term Loan B debt and partly by cash in hand. The add-on tranche of Term Loan B will be maturing in January 2026 and has an effective interest rate of less than 2% after giving effect to cross-currency swaps into fixed-rate euro-denominated debt.

Element stated that it is enthusiastic about the transaction. It believes that its MacDermid Enthone Industrial Solutions business, as well as the customers, will benefit significantly from Coventya’s scale, product offerings and intensive technical know-how. It expects the buyout to be around 5% accretive to its annualized adjusted EPS based on its previously announced adjusted EPS guidance of $1.35 or more for 2021. This, however, excludes run-rate cost synergies of at least $15 million expected to be realized within the next two years.

The company said that the buyout is a milestone for it to engage in such rare transactions that are consistent with its acquisition strategy of investing in markets that it believes to be under its ownership at attractive valuations. As stated previously by the company, its prudent balance sheet management has empowered it to fund this transaction without additional equity. It maintains its goal of a net leverage ratio below 3.0 at the end of 2021.

Shares of Element have surged 100% in a year compared with the industry’s rise of 19.4%. The estimated earnings growth rate for the company for the current fiscal year is 43.7%. 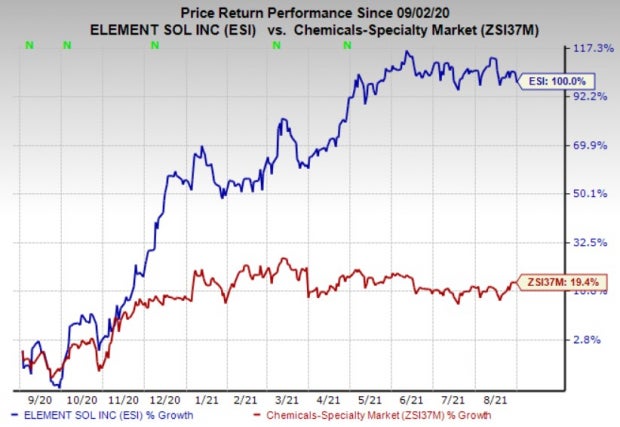 In the fiscal second quarter, the company’s adjusted earnings per share were 35 cents, which beat the Zacks Consensus Estimate of 34 cents. Its revenues were $586.6 million, increasing 52% year over year.

In the second-quarter call, Element raised adjusted EBITDA guidance for 2021 to the band of $505-$520 million from its earlier view of $500-$510 million. For the third quarter, it sees adjusted EBITDA to be in the range of $125-$130 million. It expects the impact of rising logistics costs to persist in the third quarter. However, it expects its pricing actions in the wake of raw material inflation to support margins.

AdvanSix has a projected earnings growth rate of 160.4% for the current year. The company’s shares have appreciated 172.4% in a year.

Hawkins has a projected earnings growth rate of 24.9% for the current year. The company’s shares have risen 52.9% in a year.

Atotech has a projected earnings growth rate of roughly 122% for the current year. The company’s shares have rallied 24.4% in a year.