U.S. telecom stocks have witnessed a relatively modest uptrend over the past week driven by the optimism surrounding the multi-billion infrastructure bill that was recently passed by the House of Representatives. The bill is on track for the final passage by the House by Sep 27, following which is due to be forwarded to the President’s desk for his signature to be deemed as a law. The infusion of federal funds to improve broadband infrastructure for greater access and deeper penetration in the underserved domestic markets is likely to bridge the digital divide with more focus on affordability and low-cost service option.

The bill aims to pave the way for broad-based infrastructure investments to pep up the overall economy. However, with the five-member FCC deadlocked with two Republican and two Democratic member representations, its implementation is likely to be delayed until the fifth member is nominated and confirmed. Despite the near-term challenges, the bill has received univocal support from virtually all telecom groups and is termed to be a major step in delivering “reliable, affordable, high-speed Internet to every household.” Additionally, the bill is widely expected to increase the number of households that opt for affordable Internet service, and could eventually become full-paying customers, benefiting the telecom industry in the long term.

Meanwhile, tense undercurrents continued to build up between the United States and China as new data security laws came into effect in Beijing. The laws aim to tighten the communist nation’s grip over the technology sector, tackle unfair competition and restrict unauthorized usage of user data. Although the rules are primarily based on encouraging a competitive market, the regulations are likely to increase compliance burdens for transaction platforms, making the functioning of U.S.-operated firms more complex. A recent SEC filing by Luxembourg-based Magnachip Semiconductor Corporation has further revealed that its acquisition by a China-based private equity firm has been termed as a potential security risk by the U.S. Treasury Department, casting a shadow on the $1.4 billion deal inked in March.

The new solutions that were introduced in the market include Street Radio 4402, AIR 4435 and Street Macro 6705. The products are part of Ericsson Street Solutions that boast zero footprint power systems with low maintenance and operational costs. These compact lightweight solutions blend perfectly with the cityscapes and are equipped with easy-to-install ‘plug-and-play’ features for faster deployments.

2.     In a concerted effort to create an end-to-end fiber networking solutions provider with a global scale of operations, ADTRAN Inc. (ADTN - Free Report) recently inked a definitive agreement to acquire ADVA Optical Networking SE in an all-stock deal. The buyout of the leading Germany-based telecommunications vendor that provides network equipment for data, storage, voice and video services is likely to disrupt the fiber networking market with a huge pool of complementary assets. The transaction is expected to be completed in mid-2022, subject to the fulfillment of mandatory closing conditions and other regulatory approvals.

3.     AT&T Inc. (T - Free Report) and Cisco have come up with 5G network capabilities that will help improve the performance for IoT applications across the United States. With AT&T’s nationwide 5G network, businesses can take advantage of higher bandwidth and lower latency available to more than 251 million people.

Powered by Cisco, AT&T Control Center gives enterprises near real-time visibility of all IoT devices on their network and helps mitigate security risks. AT&T Control Center is an automated connectivity management platform that delivers visibility and agility needed by enterprises to meet their IoT needs. The cloud-based platform makes it easy to launch and manage IoT solutions. It is used to accelerate time to revenue, reduce total cost of ownership, achieve service reliability, accommodate flexible business models and safeguard the business with enterprise-grade security.

Quarterly non-GAAP net income was $154.9 million or $2.46 per share compared with $93.2 million or $1.46 per share in the year-ago quarter. The bottom line beat the Zacks Consensus Estimate by 11 cents. Quarterly revenues grew 51.5% year over year to $477.9 million, driven by higher sales of Service Provider Technology and Enterprise Technology products along with solid performance across all regions. The top line surpassed the consensus estimate of $465 million.

5.    Motorola Solutions Inc. (MSI - Free Report) recently secured an $82.3 million contract from a federal government agency of Germany to support the mission-critical operations of its naval vessels. The deal reinforces the company’s position as one of the leading providers of mission-critical communication products and services in the global market. 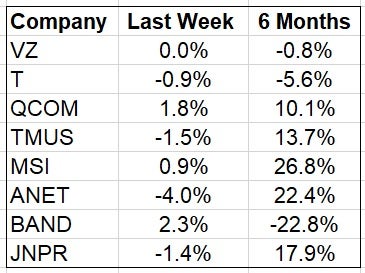 In the past five trading days, Bandwidth has been the best performer with the stock gaining 2.3%, while Arista declined the most with its stock falling 4%.

Over the past six months, Motorola has been the best performer with its stock appreciating 26.8%, while Bandwidth declined the most with its stock falling 22.8%.

Over the past six months, the Zacks Telecommunications Services industry has gained 13.9% and the S&P 500 has rallied 19.1%. 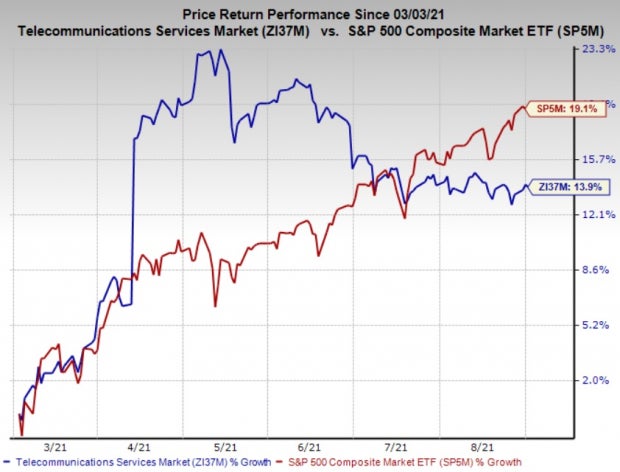 In addition to 5G deployments and product launches, all eyes will remain glued to how the administration implements key policy changes to safeguard the interests of the industry amid China’s dominance and the spread of the Delta variant of the coronavirus across the country.