Hess Corporation (HES - Free Report)  completed the previously-announced divestment of its subsidiary, Hess Denmark ApS, to Ineos E&P AS in a $150-million deal. The transaction has an effective date of Jan 1, 2021.

Ineos currently operates the nearby Siri field area in Denmark. By assuming the full operatorship of South Arne, the company expects to achieve operational and cost synergies between the two fields. Notably, the increased operating position in Denmark enhances Ineos’ ability to lead the Greensand carbon storage project in the Siri area.

Hess’ Denmark business involved operating activities focused on oil production. Hence, the acquisition improves Ineos’ balance of oil and gas assets, and is expected to unlock growth prospects that can be developed in Denmark’s offshore oil and gas sector.

Meanwhile, Hess intends to use the net proceeds from the divestment to invest in world-class offshore resources in Guyana. The divestiture enables Hess to continue focusing on its portfolio, and strengthen its cash and liquidity position.

Shares of the company have underperformed the industry in the past six months. Hess’s stock has gained 1.7% compared with the industry’s 7% growth. 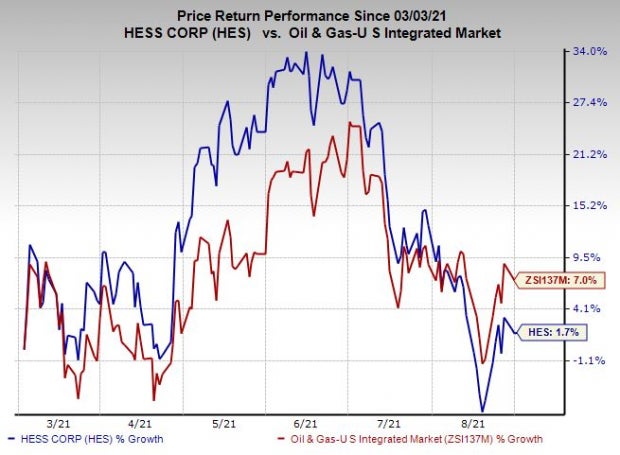 In the past 60 days, the Zacks Consensus Estimate for Goodrich’s 2021 earnings has been raised by 68.2%.