Domino's Pizza, Inc. (DPZ - Free Report) recently announced the opening of the first Domino's store in Lithuania. The move is in sync with its strategy to expand its presence globally. Residents of Vilnius can now get Pizza delivered to their door by master franchisee, Morgacita Limited.

The company also announced that it will soon open its second location in Vilnius on Ateities Street with additional locations planned in the future. The company is planning to generate more than 400 jobs in the region in the next three years.

Domino's now has stores in more than 90 markets worldwide. The company generates more than half of its global retail sales from the international markets. Joe Jordan, Domino's executive vice president of international said, “We love Domino's customers all over the world and are excited to now be able to serve those in Vilnius. We look forward to developing a loyal customer following and bringing even more Domino's locations to Lithuania in the future.” 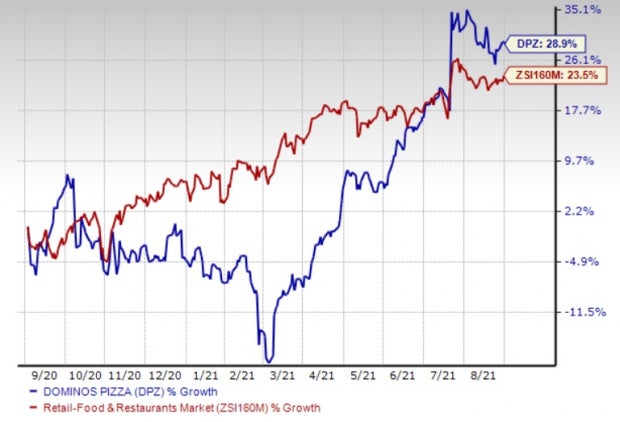 Store expansion is driving the company’s comps. Second-quarter fiscal 2021 marked the 110th consecutive quarter of positive same-store sales in its international business. Improvement in comps can be attributed to ticket growth. This was driven by the return of non-delivery service methods, resumption of normal store hours and reopening of international stores (that were closed in the prior-year quarter).

Backed by an expanding global brand presence, shares of Domino’s have surged 28.9% in the past year compared with the industry’s rally of 23.5%.

Wendy's has a three-five-year earnings per share growth rate of 9%.

Jack in the Box has a trailing four-quarter earnings surprise of 26.4%, on average.