Read MoreHide Full Article
Sempra Energy’s (SRE - Free Report) subsidiary, Southern California Gas Co. (SoCalGas), recently teamed up with Hyzon Motors (HYZN - Free Report) , under which the latter will supply hydrogen-powered fuel cell electric utility truck to the former. This partnership with Hyzon Motors, which is a global supplier of zero-emission hydrogen fuel cell-powered commercial vehicles, will take SoCalGas a step closer to its goal of operating a 100% zero-emission over-the-road fleet by 2035.
Per the deal, Hyzon is projected to deliver a Class 3 commercial service body utility truck by 2022.

With the Utility space promoting a carbon-free environment, Sempra Energy aims at enhancing its renewable asset base significantly. Thus, the company has been working on several projects to attain its carbon neutral target across all business scope.
For instance, in April 2021, SoCalGas announced its plans to convert 200 Ford F-250 service pick-up trucks to run on renewable natural gas. The deal will take the company’s fleet operating on clean fuels to nearly 40%.
In July, SoCalGas announced that it will work jointly with Sierra Northern Railway, Gas Technology Institute (GTI), and other technical experts to develop and test a zero-emission hydrogen fuel cell engine for a switcher locomotive. Creating a fuel cell engine for these trains would potentially eliminate their emissions and provide much-needed reduction in air pollution from the railways that serve California's warehouses and ports.
Considering the fact that the transportation sector accounts for the largest share of carbon emissions in the United States, the current focus is on decarbonization of this sector, which in turn has been boosting the electric vehicle (EV) market these days. Naturally, the aforementioned initiatives adopted by Sempra Energy, including the latest partnership with Hyzon, will expand its footprint in the growing clean energy market for vehicles.

In the past one year, shares of the company have gained 9.8% compared with the industry’s growth of 20.5%. 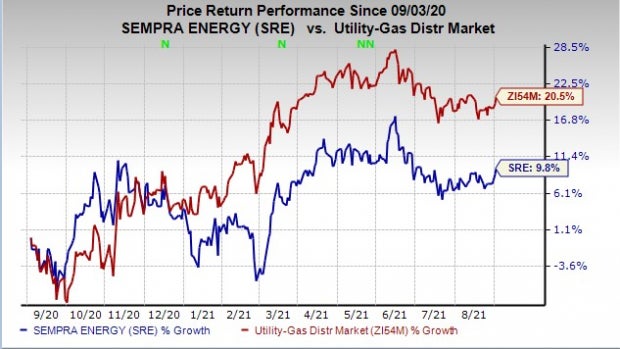