DICK’S Sporting Goods Inc. (DKS - Free Report) has been resilient in a tough environment, owing to gains from customer demand across all categories and enhanced omni-channel capabilities. Higher sales and improved merchandise margins along with SG&A leverage have also been drivers. The factors led the company to put up a robust performance in second-quarter fiscal 2021.

The Zacks Rank #3 (Hold) stock has rallied 45.3% in the past three months against the industry’s decline of 13.4%. The stock also comfortably outpaced the S&P 500’s growth of 7.6% and compared favorably against the Consumer Staples sector’s decline of 1.5% in the same period. 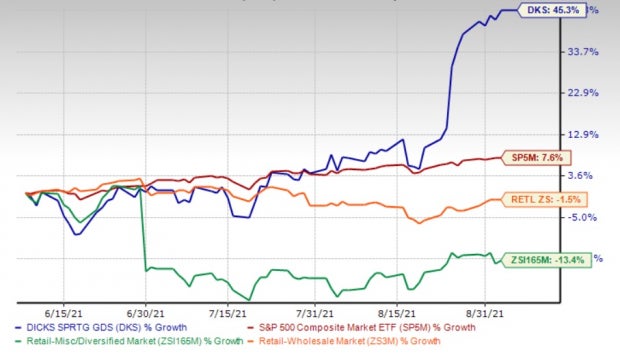 DICK’S Sporting looks well-poised for growth, given its continuous focus on developing every possible avenue to generate greater sales. As part of its long-term plan, the company wants to make significant investments in e-commerce, technology, store payroll, Team Sports and private brands. It also remains on track to build the best omni-channel experience for athletes by strengthening the store network and expanding its e-commerce presence.

Despite the coronavirus-led woes, the company has been witnessing a strong online show, driven by robust demand and improved omni-channel capabilities, including curbside pickup services and BOPIS. In second-quarter fiscal 2021, e-commerce sales surged 111% from second-quarter fiscal 2019. This represented nearly 18% of net sales, marking an increase from 12% in second-quarter fiscal 2019. The online unit benefited from services like in-store and curbside pickup, reduced promotions, faster delivery, and a better checkout experience. Its mobile platform also remains a key growth driver, accounting for more than 50% of online sales in the first half of 2021.

In fiscal 2021, management plans to open six DICK'S Sporting Goods stores and eight specialty concept stores. The company is also set to launch its first Public Lands store in Pittsburgh and expects Public Lands to serve as a key growth driver in the near term. Earlier, it announced plans to strengthen its footwear business by converting more than 100 stores to full-service footwear stores. In second-quarter fiscal 2021, the company converted around 25 additional DICK's stores to premium full-service footwear and added 50 elevated soccer shops. Its first two DICK's House of Sport stores in Rochester, NY, and Knoxville, TN, are performing well, with positive customer response.

For fiscal 2021, the gross margin is estimated to be higher than those reported in fiscal 2020 and 2019 on the back of improved merchandise margins and lower fixed expenses. SG&A expenses are likely to decline from the figures reported in fiscal 2020 and 2019 due to higher sales. Adjusted EBT is likely to be $1.61-$1.67, up from the previously mentioned $1.02-$1.11. The adjusted EBT margin is expected to be 14%.

DICK’S Sporting continues to incur higher operating costs related to COVID-19 protocols, including higher compensation and safety expenses. In second-quarter fiscal 2021, SG&A included $15 million of COVID-related safety costs. The persistence of additional costs related to the ongoing pandemic is likely to weigh on the company’s bottom line in the near term.

Better-Ranked Stocks to Bet On

Tractor Supply Company (TSCO - Free Report) , with a Zacks Rank #2 (Buy) at present, has a long-term earnings growth rate of 9.7%.