Shares of CIBC gained marginally, post announcement of the acquisition, raising investor optimism on the deal.

CIBC and Costco also signed a long-term agreement that makes the former the exclusive issuer of new Costco-branded Mastercards in Canada. The deal is expected to close in early 2022, subject to customary closing conditions. Thereafter, the bank will start issuing the new CIBC Costco Mastercard to the reformed portfolio and accept new applications, both online and at Costco Canada warehouses.

The deal does not come as a surprise as CIBC’s CEO Victor Dodig had said during the company’s earnings call in August 2021 that the lender intends to invest in non-travel cards to tap the increased consumer spending as the pandemic winds down. This acquisition move will enable the Toronto-based bank to grow its credit portfolio and draw customers from Costco’s substantial membership pool to its Canadian retail-banking franchise. This will likely enhance its market share in the payments space.

Pierre Riel, senior vice president country manager, Costco Canada, said: “Our members and CIBC clients expect us to deliver payment options that meet their needs. Through enhanced offerings, such as leading digital capabilities, robust features and stronger rewards, our members will have even more ways to get the most out of their membership.”

Laura Dottori-Attanasio, the group head, personal and business banking at CIBC, said: “This investment furthers the positive momentum we have established as we execute our st     rategy, build deep and long-lasting relationships with our clients, and grow our business. We're looking forward to welcoming Costco members to CIBC, and we're committed to providing a great client experience and earning more of their business through our expert advice and industry-leading solutions as we help make their ambitions a reality."

Shares of this currently Zacks Rank #3 (Hold) company have rallied 36% so far this year on the NYSE, outperforming the industry’s rise of 15.4%. You can see the complete list of today’s Zacks #1 Rank (Strong Buy) stocks here. 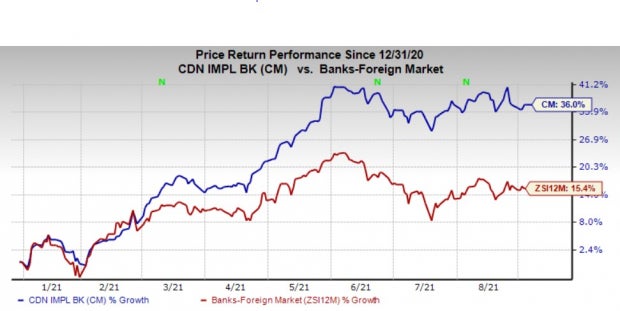 Canadian Imperial has been expanding in the United States through strategic acquisitions ever since it bought Chicago-based PrivateBancorp Inc. in 2017. In the same year, the company acquired Geneva Advisors while in 2019, it took over Cleary Gull and Lowenhaupt Global Advisors. In June 2021, it purchased a minority stake in Chicago-based Loop Capital to further expand its presence in the U.S. capital markets business.

The aforementioned deals along with its organic growth efforts continue to support Canadian Imperial’s financials, which are currently bearing the brunt of lower rates. Also, the company faces a tough competition from other Canadian banks including The Toronto-Dominion Bank (TD - Free Report) , Bank of Montreal and the Royal Bank of Canada among others.