DICK'S Sporting Goods, Inc. (DKS - Free Report) remains on track with its expansion efforts, as evident from its store opening spree. The company recently revealed plans to open its first Public Lands store in Pittsburgh, PA, and another off-price store concept this September. The store openings are likely to create 120 jobs, including full-time, part-time and temporary store associates.

The Public Lands store will offer a premium assortment of outdoor and lifestyle apparel as well as footwear and equipment brands. The Pittsburgh store will feature a 30-foot rock wall, an in-store gear repair and rental department, and specialized shops for various outdoor activities such as biking, camping, fishing, paddling, skiing, climbing, running and hiking.The company also noted that 1% of Public Lands sales will be utilized for local and national conservation efforts. There will be a ribbon-cutting ceremony to kick start a celebration between Sep 24 and Sep 26 to commemorate the opening of the Public Lands store.

Another addition to DICK’S Sporting, namely a Going, Going, Gone! concept store in Royal Palm Beach, FL, from Sep 1, will come with the most popular athletic brands at affordable prices. Customers are expected to benefit from hot deals on footwear and apparel. Discounts of up to 70% will be available throughout the year.

DICK’S Sporting has been gaining from significant investments in e-commerce, technology, store payroll, and private brands. It has been witnessing a strong online show, driven by favorable online demand and improved omni-channel capabilities, including curbside pickup services and BOPIS. E-commerce surged 111% from second-quarter fiscal 2019, representing nearly 18% of net sales for second-quarter fiscal 2021, up from 12% on a two-year basis.

Notable services like in-store and curbside pickup, reduced promotions, faster delivery and a better checkout experience acted as key growth drivers. Its mobile platform is also performing well, accounting for more than 50% of online sales for the first half of 2021.

Consolidated same-store sales (comps) advanced 19.2% compared with comps growth of 20.7% and 3.2% in second-quarter fiscal 2020 and second-quarter fiscal 2019, respectively. This can be attributed to double-digit sales growth in its core categories — hardlines, apparel and footwear — along with higher average ticket and transactions. Higher sales and improved gross margins also aided bottom-line growth.

Adjusted earnings are now envisioned to be $12.45-$12.95, which reflect a sharp improvement from $8-$8.70 per share stated earlier. For fiscal 2021, the gross margin is estimated to be higher than those reported in fiscal 2020 and 2019 on the back of improved merchandise margins and lower fixed expenses. SG&A expenses are likely to decline from the figures reported in fiscal 2020 and 2019 due to higher sales. Adjusted EBT is likely to be $1.61-$1.67, up from the previously mentioned of $1.02-$1.11. The adjusted EBT margin is expected to be 14%. 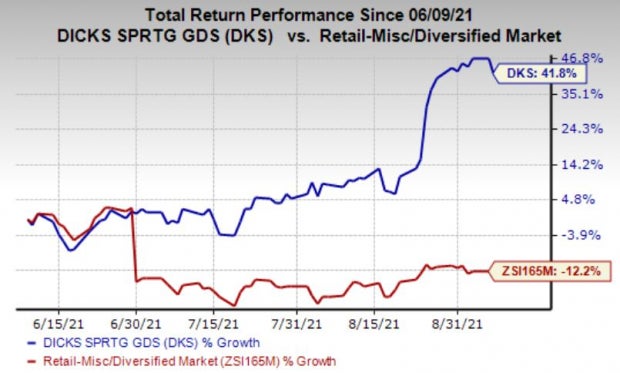 Better-Ranked Stocks in the Retail Space

The Children’s Place (PLCE - Free Report) has a long-term expected earnings growth rate of 8% and it currently flaunts a Zacks Rank #1.