TC Energy Corporation (TRP - Free Report) has been granted the privacy shield by the Canada Energy Regulator (“CER”) to keep the names of its insurance providers confidential.

In times of rising opposition against the development of the Canada oil sands, privacy shield assumed greater importance to avoid triggering outrage from indigenous and environmental groups, which have been campaigning around companies’ insurers for the past few years.

TC Energy became the second Canada-based pipeline firm to obtain permission to keep the names of its insurance providers a secret. In April, Trans Mountain Corporation received permission to withhold names of its oil pipeline’s insurers after winning a battle against protestors, who made efforts to oppose participants in financing the fossil fuel industry.

Trans Mountain claimed that revealing the identity of insurers resulted in the termination of insurance coverage, a sharp decline in available insurance capacity and a significant rise in insurance costs. The company added that the continued disclosure of insurer names would induce targeting and pressure on insurers to discontinue or restrict coverage.

Unlike Trans Mountain, TC Energy did not prove that oppositions reduced the number of insurance companies, which are willing to provide gas pipeline coverage or raise policy premiums. This is because the identities of insurance firms are considered as private commercial information under the legislation that defines its mandate.

Pipeline insurers’ names still have to be disclosed to the agency. Notably, information related to the limit of liability or amount of coverage, the insurance broker issuing the certificate, the policy dates for coverage, and the type of coverage will be available to the public.

Shares of the company have outperformed the industry in the past six months. Its stock has gained 6.5% compared with the industry’s 6.3% growth. 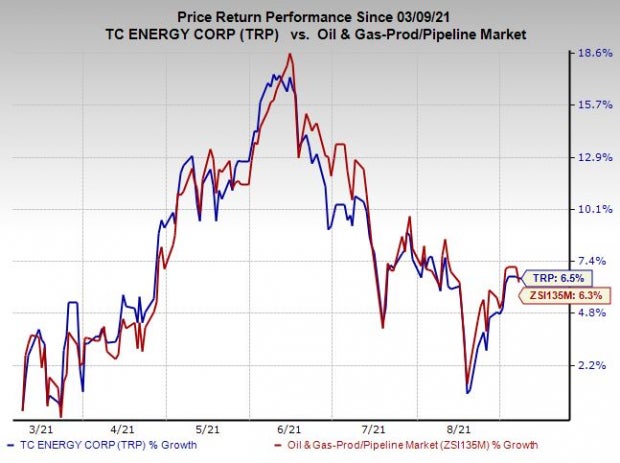